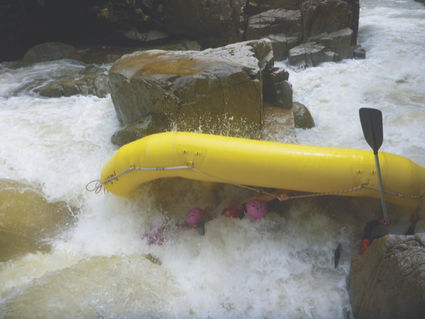 So what should we do this year. The regular turkey, stuffing and mashed potatoes? It has changed for a lot of families. For us, we will just swing with things. It's good. This year has been a year of mixed blessings.

Cancer: (I hate that word but what has it brought me?) anxiety and fear when my mind is out of God's control. Interesting...I am so thankful for Scripture which has acted like a salve and a band aid giving me protection, direction, and focus on Christ amidst huge threatening waves. Waves can be really scary. When you are caught in one you have no power.

I remember one summer years ago when we were working with Youth For Christ, we went to a camp for a week. Joe and I, plus two other staff, riding on a bus with maybe 15 teenagers from Tacoma, Washington to Big Sky, Montana.

Each day during the week we had the opportunity to go white water rafting. One raft per person, one oar, and one seat which was set low in the raft. We also wore a life preserver. I got into the raft all excited ready for my adventure. Off I went. Some of the water was tranquil and clear.

Paddling, I thought, this is a breeze. Then small rocks appeared and I sailed over them bumping my butt. That didn't feel so good. The rocks kept getting bigger and bigger. I realized that I would have to navigate around them. I had some lead time as I could see them coming, and I quickly learned how to paddle.

Yikes...the only way to divert my direction was to dig my paddle deep making it difficult for the water to speed by. I went through shoots containing mini waterfalls, and roaring waves.

I barely had time to think or react. Then it happened. My raft sailed up against a big rock and flipped over. I was tossed out and sucked down into an undertow.

The water current which was pushing against the rock folded under itself trapping me at the base of the rock. My life jacket didn't save me. It felt like a thousand pounds of water pushing me down. I knew that there was no hope of getting loose from my situation.

Terrified, I looked up and saw that my raft was still caught against the rock. I also saw a small white rope which was attached all around on the top of the raft. At that point it was my only hope.

I pushed up with my legs and reached up toward the raft with all the strength I had. Barely grabbing the little rope. Feeling the rope in my hand was amazing. I can still bring the memory along with the feeling of being pounded with water 40 years later.

No one knew or saw what had happened. No one knew that I almost drowned. I went down the river to the nearest place I could land my raft, and got out. I shook from head to foot. And I shook in the van all the way back to camp.

That experience was terrifying! It is a horrible feeling to feel or be in a situation where you are out of control.

Scripture is like that rope. God's perspective can take ahold of your situation, bringing wherever traps you into another dimension. You have to be willing not to be set in your ways and be teachable. Maybe you have chosen to go down life's river without a life jacket. I am sharing about where I choose to live. Why would I choose to be stuck at the base of a rock with no way out?

Psalms 32:8 says: The LORD says, "I will guide you along the best pathway for your life. I will advise you and watch over you.

Psalms 23:4 says: Even though I walk through the valley of the shadow of death

I will fear no evil, for You are with me; That pretty much says it all.

I work at being thankful.