They bring poetry into our daily lives 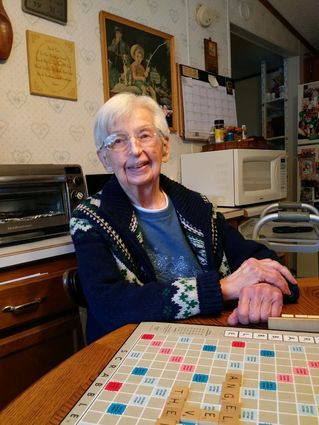 So, last week, I came bounding out of bed at 6:10 in the morning and saying just one word.

The name sounded familiar on WILD 102 radio last Friday when his name was announced in the daily obituaries - Norman Jerome Miller, 77, of Greenbush.

A character, he definitely was.

He was an institution, a man who stood out anywhere - tall, talkative and never dull.

And what an obituary - crafted by his wife, Sharon, and their daughters.

Luckily, I was able to go online, type in his name, and it is one of the finest obits ever composed.

Parts of it appear in italics below, which truly capture the man.

Norman J. Miller (Norm) passed away on November 5, 2020 leaving behind his stories, his boat, and some "great deals." Norm loved a good bargain and never passed up a garage sale. He believed anything could be fixed with a bungee cord or a little duct tape.

Sure, I could have sent a sympathy card, but I wanted to talk to his wife of 59 years because she had lived with and loved this popular character.

He was a small town barber, which is better than being the mayor.

Norm and Sharon met in high school in Goodridge and fell in love.

"I was 17 and my parents had to sign and maybe his too when we got married 59 years ago. I think we got married on a Saturday. He was in the Army. There was no honeymoon. We didn't have enough money. Before we left, we stopped at his mom's, and she gave us some money so we could stop one night before we had to be in Cambridge." she said, mentioning that he was stationed at a missile complex in Bethel, Minnesota - of all places.

There's a big hole in her life, but there have been so many highlights.

Did he cut your hair too?

"He did just once and said, 'Never again! You go to the ladies!'"

And that was Norm, always quotable, as noted in the following paragraph from his obit.

For his 21st birthday he bought a 1964 red Mustang and enjoyed the hot rod until he had to trade it in for the "twins"...or that's what he always claimed. Bonnie and Brenda were eight months old when they moved to Greenbush in June of 1967 where he opened his barbershop. He operated the shop for over 53 years. His family continued to grow when Valarie joined them in 1972.

Was he as talkative with you and the girls as he was with others?

"Our daughters said, 'Gee, we never realized our dad talked so much. He didn't talk like that when we were kids,' I think it was the stories he could tell when he was with his buddies," she said, laughing.

"Norm was quite the character. I did a lot with him. We had a good time and hunted together. He was my barber. He cut me pretty good. He will be missed," he said.

Over the years, area newspapers interviewed him, which was like getting quotes from the late Casey Stengel, the legendary Hall of Fame baseball manager with the New York Yankees and the hapless but Amazing New York Mets.

He loved to tell stories to anyone who would listen, and it was even better if they printed it. It was the quotes in those articles that best described him.

According to one interview, Norm said he'd never had a bad day in the barber business or that he hated his job.

Another article shared that Norm was "pretty handy with the clippers and the chatter." During this interview, he was asked if he was a chatty barber to which he replied - "Sometimes, people come in and say, 'Just cut the hair and cut the crap.'"

He was a reporter's best source - a bloke who could put a smile on the printed ink.

In another recent newspaper article about his life, he was asked about his priorities - "God is at the top of my list - then family, boat, motorcycle, and my bass guitar. I play bluegrass and Old-Time music.' If he was being honest, the priority of this list may have changed depending on whether or not it was the fishing opener.

Believe it! We aren't getting out of here alive.

But damn, Norm was good copy.

Although the adventures of "Stormin Norman" may be over here on earth, his stories will live on. We are comforted to know that he's sharing his stories right now in Heaven with his son Mike, son-in-law Bryan Grunig, several family members including his parents and sister Sharon, as well as his many hunting, fishing, snowmobile and barbershop buddies.

Heaven is getting a helluva character!

Heaven will have to wait a good while for Olga Markovich, who turned 98 on Wednesday, November 25.

We'll keep her as long as the good Lord is willing.

She belongs on Jeopardy answering, "Who was the last King of Siam?"

In case, you don't know where Siam is, it's Thailand these days and the last king was Mongut.

Olga is a sharp cookie, and it's been almost a year since we visited person to person.

Her favorite quote every time we talk by phone is, "God has been good to me!"

And whatever you do, know this. She plays a wicked game of Scrabble. As her daughter, Denise Hendrickson, recently said, "Mom is a whiz and doesn't just make three letter words. She makes long words."

Yes, and the old girl has a preference for triple letter and triple word blocks.

There she was, little Joy Ullman, looking like a little princess one day in May, and she calls me "Papa Bro."

It is like music and someday soon, hopefully, I can pick her up and hug her and hear her giggle.

I miss the old days.

Once, I was the greatest Checkers player of all time after consistently kicking my dad's butt.

I never lost to him (didn't know he always let me win) and therefore, since I considered him a genius, I challenged everyone in my family to a Checkers tournament.

This time, even my old man beat me. Then my mother added insult to injury by winning after my siblings had thoroughly whupped my butt.

Maybe I was 11-years-old, and I was crushed. I was a loser. Aren't we all at some times in our lives and loves?

Every kid who plays youth and high school sports learns to live with losing. That's life.

You can win a state title, but you can't do it every year.

When the ref raises the other guy's hand, say in wrestling, you're required to shake the winner's hand.

Some guys are mutts and just slap the hand and walk away sulking.

Once, we had a wrestler who got his butt kicked in a tourney at Bemidji.

Oh, he immediately vowed vengeance and that he was going to attack the guy in the locker room.

"How are you going to do that?" asked Coach Dale Jaenicke. "Use a bat. He just kicked your ass royally."

The hot head calmed down.

He wasn't a bad kid really and could be likable at times. But he was a damn poor sport and an embarrassment.

Two Republicans, my siblings, texted on Monday with a couple of gems.

"I think the great majority of people want Trump to go quietly into the night," said my brother Rob.

"I would definitely agree with you. He's such a poor sport," said my sister Barb Thode.

Who can admire a poor loser?