Meet the Newlywed Greens, Quite the Team! 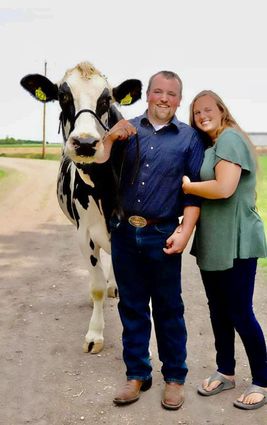 Peaches with Matt and Miranda

If there ever was a natural-born salesman who's good at shoveling manure and baling hay, it's Matt Green who, along with his bride, Miranda (née Glad), are Roseau County's Emerging Leaders for 2020-2021.

He's been a happy guy ever since he became acquainted with Ms. Glad, who's proving quite capable in the dairy barn helping out with the milking on the family farm five miles east of Greenbush.

He laughed often a week ago Thursday while speaking by cellphone.

"I farm with my dad and grandpa. I'm the fourth generation on this place," he said, noting that they have dairy cattle, beef cattle, and are grain farmers.

"We have corn, soybeans, wheat, and some alfalfa for the cows," he said, mentioning that there aren't as many dairy operations in Roseau County anymore.

That isn't scaring off Matt, who milks about 60 Holsteins.

He chuckled when asked if they milk by hand.

"If we were doing it manually, we definitely wouldn't be having that many to milk."

He graduated from Greenbush High School in 2009 where he played basketball.

His focus these days are on his bride, who is a Lancaster lass.

"I got set up by my aunt," he said, recalling that his future father-in-law had been doing some heating and air conditioning work at his aunt's house and had mentioned that he wanted to find a good Christian guy for Miranda.

"And my aunt said, 'Oh, we can make that happen!' It was obviously meant to be." he said.

And that's how Miranda Glad became the future Mrs. Green, who isn't a farm girl.

But she's a fast learner.

"She was homeschooled and active in their church. Miranda helps on the farm and also has her own business called 'Sewing Simple Stitches.' She makes doll clothes," said Matt, adding that they're training Miranda to drive tractor.

"She helps milk and works one day a week at the Hallock Public Library," he said before explaining how they became Emerging Leaders.

"We were actually asked by Tyson and Cassie Lovejoy, last year's Emerging Leaders, if we would like to do it," he said.

He recalled all the rain last summer with almost 20 inches of rain in 45 days.

"It was tough on the crops, but this fall was nice," he said. "It was a blessing compared to last fall when we couldn't get the ditching and field work done. We were able to make up some ground this year. It's a beautiful fall even right now. We couldn't ask for a better fall."

How big of a farm?

"We run about 3,500 acres, and we help our cousin, Wendell Green, out. We stay plenty busy with 70 pairs of black Angus too.

"It depends on what you're looking for. With the dairy cattle, there's never a break. It's 24/7, but I prefer the dairy cattle and the demeanor of them. They're part of the family. All the cows in the barn have a name."

Then he mentioned one of his favorites - Panama.

"She's the first cow in the barn by the door," he said, also tipping his hat to Butter Scotch.

"She's our oldest one. She'll be 12 in May. She's another one that has been to the county fair many times for 4-H."

They even lease dairy cows to 4-H kids to show at the fair.

"We don't charge. For us, it's about keeping the county fair going and getting the general public educated. If the cows are there, you get a chance to talk to people."

That's what he does best.

"It's amazing how far removed the general public is from agriculture. They have very little or no clue about farming in general."

He was pumped up.

"The dairy cattle is where my passion is. I'd love to expand it. That's my goal. We'll see what happens. Milk prices are volatile just like the grain prices."

He remarked on how the trade war with China affected grain prices.

"There's no doubt about it. But now we have many buyers of soybeans that we're exporting. It's kind of like, do you want to have one buyer of your export beans and be controlled by them, or have 20 buyers and spread your risk out?"

That's the equivalent of not putting all your eggs in one basket.

Matt Green is very familiar with Matt Przekwas, who is the Emerging Leader for Kittson County.

In 2019, Mr. Green was asked to bring some of his cows to Hallock for the first time to their county fair.

"I got to spend a week out there. His kids were showing in 4-H. We had a blast."

He's full-plate guy. So, being an Emerging Leader is just another privilege in his life.

"We've already had our first weekend session. It was in November, and we were to meet in Detroit Lakes. But with all the Covid stuff, we did it via Zoom," he said, explaining that they will have three weekend sessions in January, February and March.

He is hoping for at least one meeting together.

"I'm a people person. I like to visit and get together in person. There are 16 couples in the northwestern part of the state," he said, adding that it would be a great way to connect with other farm couples.

He was never asked if he does the dishes or the laundry.

There is a good chance he does.

"Our birthdays are a month apart exactly. Mine is December 16 and hers is November 16. She just turned 30 and I turn 30 in about 10 ten days," he said with considerable delight, adding that they were married at the Galilee Bible Camp in Lake Bronson on Saturday, August 8.