Badger has that small town feeling 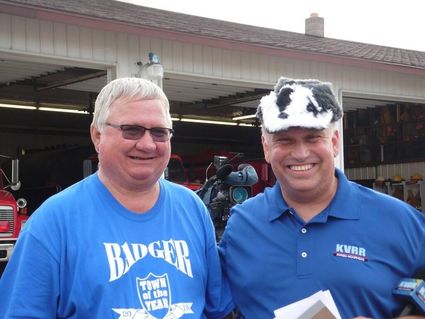 It's funny about small towns.

They all stand out, one way or another, even in the 21st Century.

What's missing are the trademark Coca Cola signs that were hanging over store fronts in small towns generations ago.

Jim Rinde, 64, is the mayor of Badger and a true promoter of an estimated population somewhere in the vicinity of 325 residents.

Maybe they even included the pets!

Rinde, a former rural Badger farm boy, left for about 30 years and then returned 15 years ago.

About a year later, Mayor Charlie Walsh resigned and a couple of local chaps asked Jim if he'd fill in the rest of the term until somebody came along to run in the next election.

He said, "Sure," and he's been the mayor ever since.

"I grew up north of Badger on a farm and graduated from Badger High School in 1975," he said, mentioning that he played football, basketball, and even wrestled.

"Believe it or not, Badger had wrestling for a few years in the 1970s," he said, adding that his wrestling weight was 155 pounds.

"Yeah, I tell this story to my grandson who likes wrestling, 'You'll meet your match. He'll pin you and the next time you'll pin him.' Sure enough, I pinned this Greenbush kid and the next time he did me. We were fifty-fifty."

Jim started his agricultural career in 1975.

"I went to work for Farmers Coop Elevator in Roseau and farmed on the side with my brother," he said, remarking that he lived in Roseau for 30 years while raising his family.

Then, he came back to Badger.

"I'm really proud of the town and the school. Mr. Ricke has been doing a real good job," he said, explaining that Kevin Ricke is the superintendent and principal.

"Plus, he drives a bus route," he said, agreeing that there aren't many high school superintendents driving bus routes in Minnesota.

The mayor was on a roll.

"Mr. Ricke does a good job, and our enrollment is holding and the school is doing fine," he said, singling out the local grocery store (KC's Country Market ) for doing a fantastic job.

"They have been very careful during Covid and have kept everybody somewhat healthy."

It's a neighborly grocery store. When people have been quarantined, KC's Country Market has delivered groceries to homebound families and individuals.

Mayor Rinde is sold on Badger.

"Absolutely, it's a very good town," he said, tipping his hat to the town's local cafe - Twins Cafe.

"They've done a real good job with takeouts," he said, adding that Skippy Finns serves as the town's lone bar and liquor store.

The owner is Lloyd Hietala, a retired English teacher, who was allowed to start serving sitting customers on January 11 for a beer or something a little more potent.

If nothing else, the mayor is the town's biggest booster.

"Buy a drink and order a pizza at Skippy's," suggested Big Jim.

Ever have any volatile city council meetings?

"Well, yes, I have. It's nothing that a person can't handle. I'm a firm believer in involvement. Anybody that comes to me and says, 'Jim planned this' or 'Jim Rinde did that.' No, it's not Jim Rinde's decision. We formed a planning committee."

Not that the buck doesn't stop with Mayor Rinde, who is a voting member on the Badger City Council, which includes Corey Christianson, Stacey Lockhart, Dan Carpenter, and Thomas "Tommy" Dean.

Town of the Year!

It was the talk of the town.

A KVRR celebrity, Chief Meteorologist Rob Kupec, arrived in Badger to present the town officials with the award.

"It was a good time," said Rinde, recalling that it was on a Monday that Mr. Kupec honored the town, even donning a badger pelt fur hat that he had brought along for the occasion.

It might have been one of the rare occasions that a good number of Badger residents downed a few beers at Skippy's on a Monday night.

With possibly the widest Main Street in Roseau County, Badger has a unique look.

And it isn't a dying town. Badger is developing property over by the football field.

"It's between 8 and 10 lots," said Rinde, explaining that out-of-towners are interested in moving to Badger and building homes.

"I have a lot of memories of how the town looked years ago when there were more businesses, like Gambles," he said, adding that it was almost like having a Walmart in little Badger.

"If you needed something, if you couldn't find it at Gambles, you didn't need it," he said, adding that the long-gone store reminded him of Young's Store in Middle River and Lee's Store in Wannaska.

"If you go dig around, you'll find it," he said about these small town retail stores that seem to have just about everything.

"I like it. It's nice and quiet, and everybody is friendly," said Mr. Housker, who lives a mile southwest on Highway 11.

"And it's got that small town feel to it," he said.

That's just what Big Jim Rinde likes to hear about his town.

Have a gavel that you pound once a while at city council meetings?

It's a good-sized fist!