Patrolman Buckentin is the new cop in Roseau 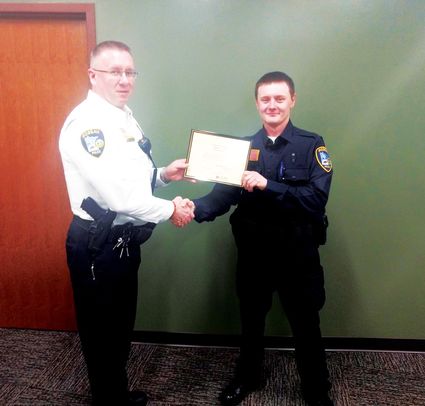 The latest is Josh Buckentin, formerly of LaPorte, Minnesota - a young man who was hired on December 28 and sworn in on January 12.

"He's very personable, trustworthy, smart, a good communicator, and comes from a good family," he said, adding that Josh's parents were present for the swearing in.

Afterwards, Patrolman Josh Buckentin, a graduate of Walker-Hackensack High School where he played football and baseball through his senior year, explained why he didn't participate in a winter sport.

"I could have wrestled, but I like ice fishing a little more than wrestling," he said.

Always, though, the newest cop in town has had his focus on protecting and serving.

"Ever since I was three feet tall, it's the only thing that I ever wanted to do," he said.

Prior to graduating from Central Lakes College in 2020, he did his skills training for law enforcement in the summer of 2019.

While he's always wanted to be a cop, his choice of employment has revolved around the outdoors.

"I worked at resorts on Leech Lake all the way through high school and the year after high school," he said, adding that he then worked full-time in Brainerd.

"I was driving a forklift at Menards," he said.

He's done a wide variety of jobs from cleaning fish to filling up outboard motors to unloading semis.

Consider Patrolman Buckentin an average-sized guy at five-ten and 170 pounds.

"I was an offensive tackle and defensive end," he said about his high school football days.

Been up here before?

"I've been up here ice fishing, That was another big part of me coming up here. It's the outdoors aspect of hunting and fishing. That's what I live and breathe."

He next mentioned his parents.

"My dad is Darren, and he is employed at Superior National Forest," he said, adding that his dad is pretty proud of him for achieving his dream.

"My mom, Nancy, works at Cass Lake-Bena Elementary School and is equally proud that I am a police officer," he said, noting that Roseau is a nice fit for him.

"I like the small town aspect where everybody knows everybody, and everyone is good people," he said, mentioning that he's enjoyed meeting people around town.

"The reaction has been good," he said. If nothing else, they can talk about hunting and fishing.

His badge number is 1478, and he has been working four days a week.

"I have no complaints," he said on Tuesday, January 12, as he hit the ground running as the City of Roseau's newest cop.