In a lifetime with wonderful characters 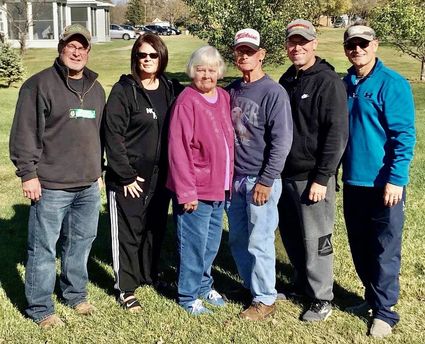 I've bumped into a lot of amazing characters over the decades.

Some are scamps, tramps, winos, roustabouts, Holy Rollers, charlatans, and even the totally legit.

So, it was pure fate a week ago Thursday that I was right behind Doug Dahl and his wife, Linda, waiting to get our second Covid-19 vaccine shots.

Once, Mr. Dahl, as they respectfully call him in Greenbush, wanted to choke me after I sent over a completely bogus roster before a possibly tight wrestling dual in the 1980s.

Those weigh-ins at the Swamp still ring fondly in my memory.

Doug called for the two 103-pound contestants to step on the scale, and a different Ram stepped forward. It went right up the line-up that way.

The names didn't match the weights on the official program.

Each competitor has to be listed at his respective weight.

Later, Coach Dahl, raising his voice, had my attention that we had mailed or called over nine out of 12 incorrect competitors.

That was probably before fax machines.

We had juggled the weights.

The only thing I could think of was, "Look, Doug, most of the people in Greenbush can't read! They won't know the difference."

He threw his hands up in the air.

They kicked our butts.

Those years until Doug retired in 1995 were the Golden Years.

I'd go on the radio with the great Brad Zoeller and make outrageous statements several days before our home duals with the Bush.

And their fans flocked to the Roseau gym, still smarting from my comments that they will have taken their first baths in months and would finally get to see electric lights.

One year, Mr. Zoeller, the best ever to play along with pure mischief, laughed as I saluted the Greenbush coaching staff of "Harley and the Canadian Greco-Roman Midget Wrestling Champion."

Harlan Solberg was Harley, Doug's long-time assistant, and Doug is at least as tall as I am.

We shortened it to "Harley and the Midget."

We drew our biggest crowds every other year.

They came for vengeance, and we sold a lot of tickets and the concessions stand was rocking with cash.

In 1984, we had this economy-minded principal, the late Ron P. Kockelman, a native of Canby, who demanded that we ride back from Bagley to Roseau instead of spending the night in a motel after a full day of wrestling.

God bless Doug Dahl, who did Les Kvien a favor after I asked Doug if he could find room for our 167-pounder Region 8 finalist Les Kvien at the motel.

Les said he had a great night of sleep

How was I to know that Doug allowed him to sleep on the floor in the coaches' room and that Les snored so loudly that Doug - as rumor had it - ended up sleeping in the bathtub?

That Saturday, Les won the Region 8 title to advance to the state tournament and become Roseau's first state wrestling champion.

Great memories, thanks to Doug, who comes out of Estavan, Saskatchewan, and was a hockey player before arriving at Bemidji State in the 1950s.

For whatever reasons, he joined wrestling for a couple of years and was a teammate of Gerry Gingles, a Nebraska native and later Hall of Fame wrestling coach for Canby - as Doug would later be for the great town of Greenbush.

A week ago, Thursday, Doug was remembering when he wrestled for Bemidji State before joining the hockey team.

He was smiling through his mask, animated, and didn't seem to want to bear hug me right to my back on the floor.

"Hockey practices were a lot easier than wrestling practices," he said and laughed.

Doug's a great guy and a terrific traveling companion, and is never dull.

In 1982 and 1986, four of us - Irv Wilson, Steve Furuseth, Doug and I - attended the NCAA D-1 Wrestling Championships in Iowa City and Ames respectively.

Irv Wilson, now deceased, was a fascinating chap and a charter member of FOPS - the Fraternal Order of PygmieS.

We all were FOPS.

None of us topped five-six.

He was a colorful character and a dapper gentleman who seemed to be a stickler for honesty.

It must have been in Ames when, on a lark, I raced across the street upon seeing a guy about to put a quarter in a newspaper coin slot.

Just as he was shutting it, I grabbed the glass lid and retrieved a free newspaper.

Irv immediately dubbed me the newspaper thief, lecturing me like he was an archbishop.

It was on the last night in Ames that we found a dark shopping mall to park Irv's camper, which was a decent-sized rig with plenty of room to sleep comfortably.

Within moments, Irv scampered outside and hooked up to the electric plug-in from the nearest closed cafe.

About an hour later, there was banging on our door. It was a Vietnamese chap saying loudly - "You steal my electricity!"

Within seconds, Doug handed the gentleman a $10 bill and the owner said, "Thank you!"

Immediately, I commented to Irv, who had the commanding presence of a Napoleon, "We're both crooks. I'm a newspaper thief and you're an electricity thief."

There was lots of laughter and a couple of more nightcaps.

Steve Furuseth would later say that Irv was the most relaxed he'd ever seen him on those trips.

He was with a rogue from the woods and a fine gentleman from the Bush.

You never saw any of Doug's wrestlers step out on the mat and flop around like a fish.

They came loaded for bear, much to our chagrin.

That's a tough combination to beat.

Reached for a comment, Steve Furuseth, the Rams' head coach from 1972-79, who also served as an assistant coach for a number of years in the 1980s, sent the following text:

I would like to say that through the years, we tried and tried to outthink Doug, with rare success. He was a fine coach with great integrity and high-level intensity.

His sons were great kids and a credit to Doug and his wife's parenting skills. We couldn't seem to beat them either. Our lives were richer in having adversaries like Doug and his Greenbush teams.

That says it all!