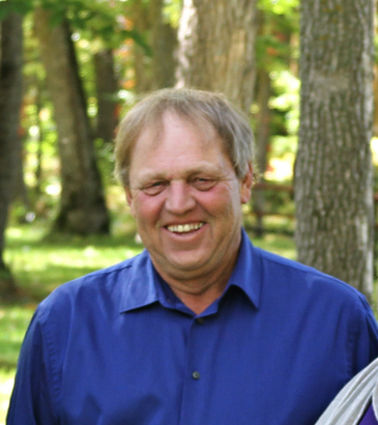 Steven Wayne Lee was born in Roseau on April 12, 1955 to Albert and Gloria (Thompson) Lee. Steve grew up on his family farm, learning the dairy and small grain business alongside his Dad. He attended Ross School through the 8th grade until that small country school closed. He then went to school in Roseau and graduated in 1973 from Roseau High School. He attended one year of college at Northland Technical College before coming home to work with his Dad and eventually taking over the family farm.

Steve married Connie Dahl on March 3, 1984 in Thief River Falls. They had four daughters together; the "Lee girls". He showed his love to his daughters in so many ways, even if sappy words weren't his thing. We felt it with his slug on the arm, checking to make sure we changed our oil, and waving his special wave to his girls when he met us driving on the road. He worked so hard to provide for Connie and his daughters. He was always giving his daughters and son-in-laws his best advice (whether needed or not), and was so proud of their accomplishments.

Steve loved his seven grandchildren and they sparked the "kid" in him again. He was excited to see them finally getting big enough to drive the go-kart. He was proud of the tune up he gave to the two four-wheelers this winter. They are ready for the kids to ride this spring. Papa's shop was complete with a pop machine, candy machine, an arcade game, and his collection of beer signs. He loved to tease the kids, give whisker rubs, rough-house with them, and play jokes. The grandkids loved their Papa so much and will forever miss his fun-loving nature.

Steve filled his years with so many friendships and adventures. He was able to take snowmobiling trips to the mountains and enjoyed his elk hunting trips to Wyoming with his friends and cousins. Steve, "Eagle Eye", put on hundreds of miles in his truck each deer season, whether it was for the deer or the people. Coyote hunting had recently become an entertaining challenge for him and he loved the time spent hunting with these friends. He and Connie enjoyed ski trips and vacations with friends and family over the years. They were looking forward to more adventures once Connie retired this spring.

When all the work was done, Steve made his rounds to catch up on the gossip and visiting every day! He rarely missed a breakfast with his morning crew at Twin's Corner Café in Badger. Next stop was Jon's for mid-morning coffee at the shop with the guys and it wasn't unusual to see him swing into Northern Resources for another round of coffee and laughs later in the day. He leaves behind a legacy full of stories and non-stop laughter.

Steve is survived by his wife, Connie, and their four daughters, Tara (Derek) Ellenson, Jessica (David) Simmons, Erin (Ryan) Murray, and Kya Lee; all of Roseau. His beloved grandchildren, Morgan and Nash Ellenson; Abigail, Nolan, and William Simmons; and Olivia and Samuel Murray. He is also survived by his Mother, Gloria Lee, and his sisters, Nancy (Daniel) Johnson and Janice (Royce) Larson, as well as his cousins, nieces and nephews, hunting buddies, morning breakfast and coffee crew, and so many friends.

He was preceded in death by his Father, Albert Lee.

Services were held on Tuesday, March 16, 2021 at 11 a.m. at Helgeson Funeral Home in Roseau; with visitation Monday 4-7 p.m. Interment at Concordia Cemetery. Services posted and online guest book at: http://www.helgesonfuneralhome.com