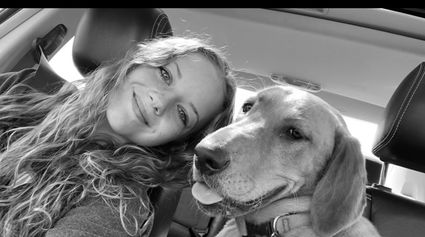 April and her pooch Leonard

April, the daughter of Mike and Rachael Hugg, grins and bears it, which impresses RHS Guidance Counselor Dan Urness.

"What has been pretty darn remarkable is she has been able to somehow keep up with her schoolwork. And to be where she is at and on track to graduate is pretty impressive," he said, adding that there were times when she couldn't read for more than 15 minutes before she suffered excruciating headaches.

"She would miss blocks of time, weeks of time, and then come back half days and partial days and alternate those to try to keep up."

"I would say her attitude is the most remarkable thing. She doesn't really get too down and knows that is how life goes and just rolls with it," said Mr. Urness last Friday.

April was spotted in Mr. Urness's office shortly before noon.

"I grew up in Roseau and I work as a CNA at Roseau Manor," she said, and knows exactly why she became a certified nursing assistant (CNA).

"Just being in the hospital so much, I wanted to be a nurse and that was the first step I could take as a 16-year-old."

April, 17, has spent a considerable amount of time in hospitals.

"I've had two brain surgeries and had both of my legs broken and twisted. All the bones in my legs were rotated so my kneecaps wouldn't go the wrong direction. I was 13 and 14 for those two surgeries," she said, adding that the surgeon inserted rods in each lower leg.

Eventually, she might need surgeries on her hips and recalled that before her legs were surgically repaired, there had been lots of pain.

"I couldn't walk far and couldn't run. My kneecaps would go in the wrong direction from early childhood," she said.

By the seventh grade, the severe headaches began.

"I started getting migraines when the lights would go off and they would turn on the SmartBoard."

She ended up in the ER frequently.

"Roseau told me it was a cyst and that it was fine and wasn't a problem. They told me to go to a neurologist. We didn't even make it to a neurologist because the appointment was like two months out."

Her first brain surgery was in December 2016 when she was a seventh grader.

"The tumor was in my left ventricle, and it was blocking my spinal fluid."

She had her second brain surgery in November 2020.

After the first brain surgery, she missed about a third of the school year.

"This year I went back to school about 10 days after the surgery."

She has missed out on a lot of things, all during her teens when even getting a pimple can be a disaster of major proportions.

"I hang out with Tessa Bertilrud, who goes to Greenbush, and my classmate, Shavonda Bender," she said with a happy giggle.

Why did you need a second brain surgery?

"They had been doing MRIs every six months after the first surgery. They had been watching this spot since the first or second MRI and thought it could be scar tissue or still swelling from that surgery," she said.

"It kept getting bigger and so they knew it was a tumor again. They had to go in and remove it. I wasn't having any headaches."

Late last fall, she went in for a routine scan.

"Probably, I don't know. I blocked most of it out."

She talked about school and trying to keep up her grades.

"So, I'm passing. This year, I haven't missed as much school, but I just haven't been able to do the work because my brain can't read very much before my head will start hurting and I'll get a migraine."

Regrettably, she is allergic to many medicines for migraines.

"I just take Ibuprofen and Tylenol and if they don't work, I have to go to the ER," she said, and there weren't any sad songs.

It's been her cross to bear her entire young life.

"I was in swimming in parts of three years. My knees would get too bad, and I would have to stop."

"I like 3D Art this year. It's really fun with Mrs. Vatnsdal," she said, adding that they are making projects that aren't on paper.

April has a delightful laugh.

She works at LifeCare Roseau Manor every other weekend and two to three days a week after school. For sure, she has some favorite patients.

"You definitely get attached to them." she said, her blue eyes twinkling over her mask.

During study hall, she goes down to pre-school and helps Ms. Angie Steinbach.

"We play games and I pack their backpacks. The previous few years I was in Mrs. Guy's kindergarten classroom," she said, mentioning that she loves Mrs. Guy, who retired in 2020.

"I love the little kids. They're so cute. It's fun helping them to read and learn how to do everything."

Told she could be a teacher some day, she admitted she had considered that option.

"But I want to be a nurse more," she said, noting that she is unsure if she will attend UND.

"I think I could do my LPN at Northland and then go for my RN at UND."

Then she mentioned being in trapshooting, and likes duck hunting and deer hunting.

Robert Honstrom, an optician at the Roseau Optometric Clinic and a CNA at LifeCare Roseau Manor, has high praise for April.

"It impresses me when I see young people in there working with these elderly folks. They're so loving and caring, and they treat them like their own grandparents. April is just a very special young lady that you just don't find everywhere. It's not a job for everybody. It takes a special young person to do that, and Roseau's got a handful of really good ones."

"She understood what made kids tick and knew when they needed help without me having to tell her. Hopefully, she will become an educator someday. She belongs in a classroom and I know that she wants to be a nurse. She's good with people young and old."

Ms. Angie Steinbach, who teaches pre-school, is the beneficiary of April's volunteering in her classroom.

"What stands out is her willingness to help with anything. She always comes in with an upbeat attitude. The other thing that amazes me is her creativity. She's very creative and comes up with new ways for old ideas," said Ms. Angie, mentioning that the kids absolutely love her.

"As soon as she walks in, the kids are saying, 'Hi, Ms. April,' and they really enjoy having her around."

She really is amazing!