This Old Bud Was One for the Ages 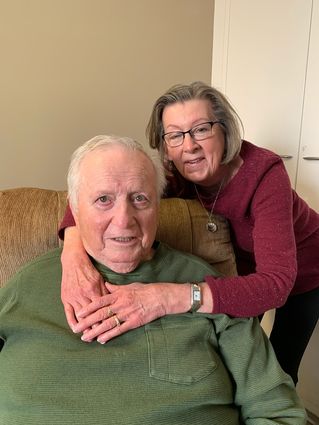 Harold "Bud" Lang, who taught science and social studies to at least two generations of Roseau High School students and quite possibly subscribed to the theory, much like many of his students, that he'd rather spend the day up in a deer stand or out on a choppy lake than be stuck in the classroom, died last weekend at age 79 from Parkinson's disease.

He was one of a kind with a booming voice, a man for all seasons, and a bloke who found true happiness with his second wife, Elaine.

Their four kids - Rich, Mitch, Tony, and Stephanie - while they were still living at home were expected to cut and split enough firewood.

There was one notable exception, his daughter, whom Bud might have cut a little slack.

He wasn't one who was constantly grinning or glad-handing like a politician on the take.

He was just plain old Bud - at times sort of stern and other times just a good old Bud to have around.

That was especially out on a lake, in particular up in Ontario on Dogpaw Lake, where he was considered the next best thing to the Good Samaritan.

Ed Furuseth, a long-time Warroad resident and local legend, made many fishing trips with Angling Bud.

"What I liked best about him is he was always the best guy running our trout lines," he said.

"He'd be out there fishing and we'd say, 'Bud, come and run lines for us,' and he would drive up with his boat and take our lines out and drop them for us. He was a character and fun to be with."

Davie Wilson, who resides in Ely, got a kick out of Bud, whom he described as a class act when they had fished up in Ontario many years ago.

"I didn't get a chance to know him really well on those two fishing trips, but he was a down-to-earth guy. I just liked him and enjoyed his company," he said.

Last Saturday, Stephanie Pierce, 37, admitted that her dad occasionally raised his voice with her.

"You gotta cause him a little trouble," she said with a slight giggle. "He taught me for two years, seventh grade and ninth grade."

She recalled that she and her dad went deer hunting every year.

"We'd sit in the deer stand together. Last year, obviously he wasn't able to go deer hunting, but the year before, we sat together and I shot a six-point buck."

On the day her father died, she was remembering a fine dad and laughed when she was told that she was her dad's favorite daughter.

After Bud became a resident at LifeCare Roseau Manor and was shut off from the outside world because of the pandemic, he refused to toss in the towel.

At heart, he was a battler, much like a lifer trying to tunnel out of a prison, looking for a way to be on the outside where he could roam free.

He didn't complain about being in a nursing home since he knew his odds with a terminal diagnosis.

But fate could wait.

He wanted a little bit of heaven on earth while he still could, and he found an ally in Robert Honstrom, a certified nursing assistant at LifeCare Roseau Manor, who took an immediate liking to Bud.

They were a pair!

Robert was Bud's chauffeur until his final few weeks.

"I knew him about a year," said an appreciative Mr. Honstrom on Saturday evening.

"Bud didn't withdraw from the world after he came to the nursing home," he said, mentioning that Bud lived for everyday and never gave up.

"He was always ready to go out on a bus ride and loved his farm, his wife, his kids, and he kept living for that. It's what I admired the most about him."

"He loved to go crop checking," he said, adding that they would also go scouting for wildlife.

They went everywhere, places that Robert had never seen before.

Sitting in the front seat, free of his wheelchair, the old educator gave directions.

"There was one time we got to the end of a road and there was nowhere to turn the bus around," he said, adding that he had to back up for at least half a mile before he could turn around.

Many times, it was just Bud and Robert out for these quick scouting ventures.

It was just the two of them, like in Driving Miss Daisy.

"Another thing about Bud. He was the best bingo caller I've ever had the opportunity to work with because he had a great voice."

"It was always the same six or seven people that played bingo every Wednesday, and he would lay out the rules. Every time he told them the rules."

That was the teacher in old Bud. Every kid who had him for social studies knew everything they ever needed to know about the Pony Express.

Robert and Bud became close during his stay at LifeCare Roseau Manor.

"It was great when he got to go home part of the day and be able to hold his grandchildren," he said.

Last Friday evening before Robert went off duty, he stopped in Bud's room and said goodbye.

"I hugged his family and told Bud I'd see him in the next life. Then, I headed home. That was tough. They're just good people."

Know this about Bud. He could give students hell back in the old days.

But that was Bud!

Here's a memory that Robert will keep close to his heart.

"I never heard him ever get short with the nurses or me. God gave me the opportunity to know Bud, and I appreciate it immensely," he said.

They were good buds.

"I was driving with Miss Daisy, but it was Bud."

We all get on the train of life. We just don't know when we're getting off.

Bud got off last Saturday.

He was a good Bud!