There is a story behind Lance Corporal (LCPL) Teddy USMC 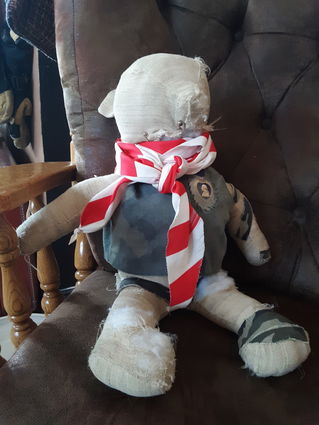 One day a couple of years ago, I decided that I needed to lose a few pounds. I also realized if this was going to happen, that I would need accountability. Ann Hambrook was both a wonderful inspiration, and gift to my life. Heading up Weight Watchers (WW) here in Roseau, Ann connected me with a solid program, and gave me the help I needed with good food choices and helping me maintain personal stability. Her husband Ted was often mentioned in our meetings as being both a support to her, and a "sweet" food stasher. Yes, that is what he did. I can relate to that, having a sweet tooth myself.

Have any of you ever noticed a recumbent bicycle with big flags tied on the back being ridden about town? Well, that is Ted's ride. They, also own a Gold Wing Aspencade which is often parked at the Super One parking lot where Ted works part time. The rest of his days are filled with delivering mail. He is our mailman. He runs. Yes, he often runs from house to house. No wonder he stays in shape! He runs all that sugar off.

Another day, a few years back, I was wherever I was, and I saw Ann & Ted. He turned to me and said "I would like to sew a bear". I had worked at Focus Corp, where we sewed many bears along with the wonderful folks who also worked there. I had the bear pattern. I later heard a story about "Teddy", Ted Hambrook's Bear.

Ted told me the following story. "My mother who has passed away due to cancer made this bear for me when I was in the Marines. He and I were in the Marines from 1982-1992. I am a Gulf War Veteran, doing three tours overseas. Once I got out of the service he, "Teddy," took on a volunteer role with my daughters, Sarah and Rachel. He spent many nights with them at sleepovers and so on. A very comforting role. He has a big heart, but is showing signs of age. His creator (mom) did some patch work, but his wounds are deep. He mostly sits on a shelf now, and oversees things. He has gotten too old to travel, his stuffing falling out, and his head is fastened with safety pins, but his heart is there. My youngest is going to collage in Kansas this fall to study Theology and I wanted to send her off with a bear. Can you make him for me?" "Sure I can," I said, "I just need my pattern back". Ted finished our conversation by saying, "that's my short story of Teddy. Talk more later... I'm on your street again today!"