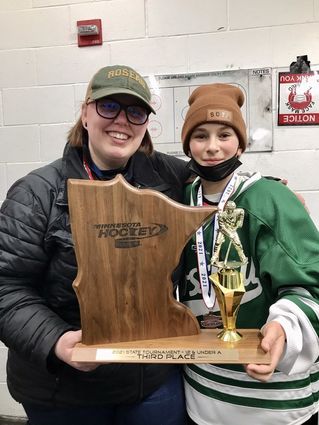 "She has accepted the offer," he said, adding that Coach Giles was the top pick because she has previous head coaching experience.

"She obviously grew up in the system and wants to get back to coaching high school girls hockey in Roseau."

He noted that Amanda has been working with the Roseau 12U hockey team the last couple of years, and a number of people had a lot of positive comments about her performance behind the bench.

Most notably, Coach Giles guided the Rams girls 12U team to third place at state in 2021.

"I think it's a great hire for our girls hockey program. They like Amanda because she's kind of tough love and is not going to baby or coddle you. She is going to push you to be a better player and a better person," he said, adding that's the person he wants coaching his daughters.

"They don't play hockey, but you get the point," he said, adding that his two daughters are basketball players.

Mr. Hirst explained that they had an interview team and Amanda was clearly the right choice.

"She's just pumped about the job," he said.

"This has been kind of a life-long dream, so I'm beyond excited. I'm super excited," she said, and was asked about her college career at St. Cloud State University (SCSU) where she was a four-year starter for Head Coach Jeff Giesen, who had a great coaching staff.

"I really learned a lot from my assistant coaches, Brita (Schroeder) Bragnalo and Jim Fetter," she said, impressed with the way they conducted themselves.

"They were very professional but could communicate with all of us. They got down to our level and had a profound impact on me," she said, adding that she had similar Roseau coaches who had also made a big impact.

"Coach Jeff Olson (girls hockey) really took the time to communicate well and get down on our level. The other person I've modeled a lot of my coaching after was my tennis coach, Jack Swanson. I got a lot from him, too."

Presently, Amanda is in the process of hiring her assistants.

She is an internal auditor at Marvin Windows in Warroad.

"My boss is absolutely amazing with flexibility. Basically, I can work around my schedule. I can work on weekends to get my hours in, whatever works with my hockey schedule."

Amanda describes her position as an internal detective for the company.

"I look at things and see what's wrong and make suggestions to fix it so we're all profitable," she said, mentioning that she has a degree in accounting.

What should the parents know?

"I'm hoping to bring a change to the entire program - not just the varsity side of things. I want to build from the bottom up and build the program into a powerhouse."

She knows the sport.

"In youth hockey, I was a forward. In high school, I was a D and when I was in college, I split the time at forward and D."

Amanda, a 2010 RHS graduate, earned a full-scholarship to SCSU and graduated in just four years in 2014.

"It saved me a lot of money," she said, adding that it's important to hit the books if you're intending to be a successful collegiate athlete.

"That's something I'm super proud of. When I was at St. Cloud State, I was a three-time Scholar Athlete and a three-time WCHA All-Academic team member," she said.

Coach Giles will definitely encourage her players to keep their grades up because it's better to keep up than have to catch up.

It's like being up a couple of goals instead of being down two goals in a tight game.