Warroad Non-Profits Continue to Provide Fun for the Entire Family 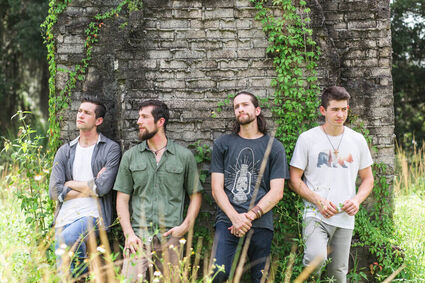 Last weekend, Warroad Community Partners (WCP) presented the third event in the Allison Park Summer Series in Warroad under the theme of Christmas in July. Those in attendance enjoyed a traditional Christmas Dinner, which had been determined through a website poll to be Turkey, Stuffing, and all the fixings. Roseau native, Jessica Johnson, entertained the crowd with music across a variety of genres, even throwing Christmas tunes into the mix. The scheduled Christmas movie was cancelled and will be shown in conjunction with the Light Up the Holidays event in late November. The following morning, local vendors lined up in tents and inside the pavilion as part of the Market in the Park.

Later that evening, a separate event brought an estimated audience of 600 back to Allison Park. Peter Furler and Phil Joel, formerly of the band Newsboys, performed on the amphitheater stage, with the band Vota opening the show. For three hours, the audience listened, danced, and even sang along to their music. At the end of the show, they invited some of the audience on the stage to sing their final tune with them. This amazing event was made possible by Steven and Nancy Fisher, along with the non-profit Jonathan Group of Roseau County, the Warroad Area Ministerial, and several grants and sponsors.

While there are a couple of weeks until the next Allison Park Summer Series event, WCP is excited to share what we have planned! The second week in August is Kids Week in Warroad, put on by the Warroad Area Women of Today, and this will culminate with the music and movie of the Allison Park Summer Series. For the 4th event in the series, we have partnered with the Yellow Rose Race coordinators to provide two days jam-packed with fun! Friday, August 13th will begin with the Yellow Rose Community Day event at the brand-new Hampton Inn in Warroad. This will feature a pasta bar fundraiser meal - perfect pre-race fuel - with proceeds going to the Warroad Area Community Fund at 5 p.m. Then at 7 p.m., head to Allison Park for Music in the Park with The Lubben Brothers. This band of triplet brothers were classically trained at a young age, and the sheer number of instruments that they play, not to mention their incredible level of skill on each one, is nothing short of impressive. Their modern songwriting style incorporates folk roots with complex pop ideas and is sure to entertain people of all ages. The evening will end with an Outdoor Movie sponsored by Lake Country Chevrolet.

Saturday Morning is Race Day, with this year's Yellow Rose Race including a 10K, 5K, and Kids Fun Run. This year, the race will begin and end at Allison Park and there will be Market Vendors in and around the pavilion along with a pancake breakfast fundraiser meal offered by WCP, beginning at 7 a.m. If you would like to participate in this year's race, visit yellowroserace.com.