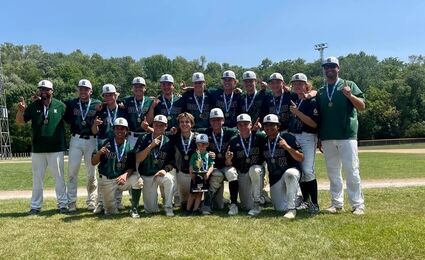 For the first time in 26 years and for only the second time ever, the Roseau Post #24 American Legion baseball team punched their ticket to the State Tournament! Post #24 solidified a District 9 substate championship with a 10-1 victory over Breckenridge and a trip down to Sacred Heart Roseau finished the weekend 4-1 with victories over Twin Valley-Ulen-Hitterdal (6-0), Fosston (9-0), Breckenridge (2-0), and Breckenridge (10-1). Elite pitching, stingy defense, and a constant barrage of offense were the keys in winning the tournament.

Post #24 defeated Fosston 9-0 on Friday as three pitchers combined to throw a shutout. Isaac Wensloff tallied the win for Roseau, surrendering zero runs on zero hits over three innings, striking out four. Brock Monsrud and Cooper Flaig entered the game out of the bullpen and helped close out the game in relief. Roseau collected 11 hits on the day. Aaron Wensloff, Zach Jaenicke, and Flaig each racked up multiple hits for Post #24. Aaron Wensloff led the team with three hits in four at bats. For the second game in a row, Roseau Post #24 didn't commit a single error in the field.

Brady Demars was brilliant on the pitcher's mound Friday. Demars threw a no-hitter to lead Roseau Post #24 past Breckenridge 2-0! Pitching was rock solid on both sides, with Demars striking out two and keeping batters off balance with a good mix of only 68 pitches. Breckenridge pitcher Cooper Yaggie sat down six. Offensively, Roseau got things started in the first inning when Aaron Wensloff doubled on the first pitch of the at bat, scoring one run. Roseau would plate both runs in the first inning as Yaggie settled in and shut down the high powered offense. Isaac Wensloff went 2-for-3 at the plate to lead the team in hits. With the win, Roseau advanced to the Championship round.

Roseau was posed with an uphill battle from the start of the Championship round - an emptied rotation due to pitch count restrictions versus a high powered offense in Breckenridge. Post #24 started the scoring in the first inning when Gavin Gunderson drove in a run. Things escalated quickly in the fourth inning with Breckenridge knocking in six runs. Roseau clawed back in the bottom half of the inning scoring six of their own and tying their opponent 9-9. Breck continued to stay hot in the heavyweight match, rallying for nine more runs in the final three frames. Heading into the bottom of the seventh, Post #24 was challenged with the task of fighting back and needing to score seven of their own runs in order to force extra innings. The comeback fell just short though, Roseau scored six runs on hits by Isaac Moser, Lyle Lisell, and Gavin Helgeland, losing the high scoring affair 18-17. Roseau racked up 17 hits in the game. Gunderson, Moser, Isaac Wensloff, Helgeland, Zach Jaenicke, and Aaron Wensloff all collected multiple hits. Isaac Wensloff, Moser, and Gunderson each collected three hits.

It was a testament to Post #24's competitiveness and their never-quit mentality. There were many points throughout the game that a lesser team would have given up and just planned for the next day. Not our boys. They ground out their opponent and never allowed them to relax. Although they didn't win the game, everyone knew Roseau had Isaac Wensloff ready to go in a winner-take-all finale.

Roseau had no trouble offensively on Sunday, winning big over Breckenridge 10-1.

Post #24 tallied 13 hits- Isaac Moser, Isaac Wensloff, Cooper Flaig, and Aaron Wensloff each had multiple hits, while Isaac Wensloff and Moser each managed three hits to lead Roseau. Moser also collected his 2nd home run of the tournament and fourth on the season. Isaac Wensloff bulldogged his way through the Breckenridge lineup- the ace threw all seven innings, allowing two hits and one run while striking out 12 and walking only one. Post #24 continued their strong defense by finishing the finale sure-handed, not committing a single error.

The final play of the game in Red Lake Falls was executed at approximately 1:20 pm, when third baseman Isaac Moser (Son of Bob & Heidi) fielded a ground ball, touched third, and fired a strike to first baseman Gavin Helgeland for a game-ending double play to solidify the 10-1 championship victory. A fitting end to a District Championship, especially with the connection between Moser and the 1995 state baseball team (Division 1). Isaac and his dad Bob are now etched into Roseau history, both playing for Roseau in the State Legion Baseball Tournament.

The Post #24 team will be headed down to Sacred Heart (east of Granite Falls) for the State Tournament on Thursday, July 29th. On Thursday, players and coaches will check-in with state directors, take team pictures, and attend the tournament banquet. Competing in the tournament will be teams from all corners of the state including: Luverne, Wadena, Minnewaska, Atwater, Holy Family (Victoria), LaCrescent, and host Sacred Heart/MACCRAY. Roseau will play on Friday, July 30th at 4 p.m. versus Holy Family. Be proud of your young men! They represent the Legion post & community with pride, compete no matter the obstacle, and compose themselves as true gentlemen. Win or lose, this is an unbelievable group of young men that will make Roseau proud!

KDMA 1460am/9.39fm will be live streaming all state tournament games and our opening game at 4 p.m. You can listen on their website (https://kdmanews.com) or if you type their station (KDMA) into the simple radio app.

We would like to dedicate this weekend to Ron Schwehr, who recently passed away. His decades of support in the Roseau baseball program will always be remembered!