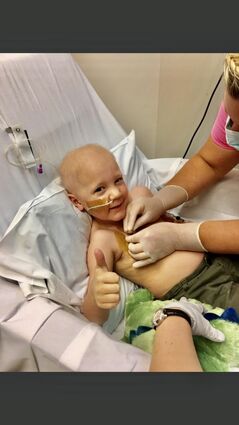 Knox giving the thumbs up before surgery

Warroad's Knox Olafson, a second grader, comes at life with grit, spunk, and a no-quit attitude.

His dad, Jared Olafson, marvels at how well his son adapted after losing his left leg above the knee.

"He's eight now and was diagnosed when he was four with osteosarcoma. It's a rare bone cancer. He had chemo and then had rotationplasty."

Mr. Olafson explained that surgeons removed the tumor in his knee and also amputated a portion of his lower leg.

"They took out above the knee and below the knee and then lifted the bottom part of his leg up and turned it backwards and reattache...