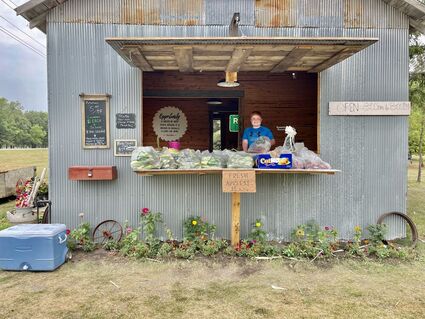 Ledger Heppner does a great job!

Just east of Lund Furniture in Roseau, Ledger Heppner, with red hair and freckles, was spotted behind the open air counter with a quizzical look.

But he was smiling.

In fact, he smiles a lot.

Especially when he was asked to smile for a photo.

Since this is the local newspaper, it makes perfect sense to cover the good people like Ledger, 11, who will be a Roseau fifth grader.

Did you pick this corn?

"I helped," he said, mentioning that they opened for business on the last Friday in July.

Heppners Granary is a well-known entity on the south side of Highway 11. People are like raccoons around freshly picked corn on the cob.

Ledger looked a little shy when told he was being interviewed for the Roseau Times-Region.

And then he grinned and giggled.

He helps pick corn, works behind the counter, and is a working lad.

"Diedrich," he said, sounding out each letter. His mother is Tera.

Right behind him on the back wall in the granary is a motivational slogan by Thomas Edison.

Ever hear of Mr. Edison?

Were you here at 8 o'clock this morning?

"No, we were picking corn at 6 in the morning. We help pick corn and bag it," he said, and was asked if he had picked the apples, too?

Ledger Heppner is the baby of the family.

"Ivan is 18, Lexi is 16, and then Addy," he said, and took the money from a customer who bought a dozen pieces of corn.

Ledger was becoming more comfortable and explained that mornings are pretty slow.

"It's usually much busier in the afternoons," he said, and was asked about his hobbies.

"I like painting," he said, and was beaming when he was told that he'd be in the paper next week.

He tried to make another sale, mentioning that a bag of apples are only $5 and the apple trees are in their backyard.

He was asked if he's ever been raccoon hunting.

"We set traps in the cornfield," he said, and was joined by his friend, Justice Ambrose, a Roseau seventh grader, who knows a good place to hang out and enjoy freshly picked apples.