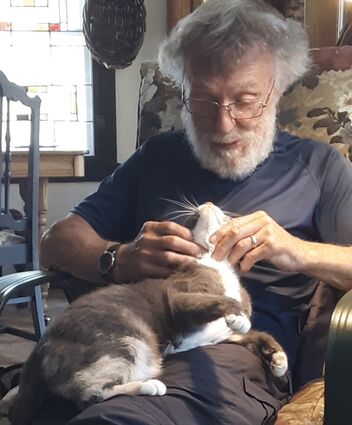 It is all Pastor Joe's fault. Yes, it is. Bailey has turned into a monster beggar kitty. She is relentless.

I get up very early in the morning around 5 a.m. I make my chocolate coffee in my transparent blue cobalt cup. I then sit in my chair in our living room. Bailey immediately jumps into my lap and sometimes with her hindend pushes my coffee cup into a precarious position. Checking my emails, and posting a devotional, I spend my morning time in blissful quietness.

Bailey knows that I am a hard sell when it comes to begging. She doesn't try it with me. All I have to do is look at her and point my finger at her and say NO!..well most of the time that is the case.

I think it is her big eyes that turns Joe into mush. Joephus thinks, "Oh poor little kitty, you need a Meow Mix treat twice a day morning and evening, at set times.

When Joe gets up, and then after his walk in the evening. Bailey knows when it is around "the time", so she starts meowing as soon as Joephus gets out of bed. It is a steady stream of demanding MEOWS!!!... until he does what she wants. Then at around 6:30 p.m. she starts her evening pursuit. She will jump up on his lap and look at him straight in his face with ears perked forward and MEOW very loudly!! He then will say "BAILEY!! It isn't time yet! You have to wait until after my walk, then you will get your treat". He says that a couple times and at each time his voice gets louder and louder. I say, "Joephus, we can't yell at Bailey!" "I know wife", he says, then it starts all over again. She is relentless, if he doesn't get up and give her her MeowMix, she heads for the nearest chair or couch and proceeds to claw the furniture. If I am home, this is where I get into the act. Now both Joe and I are hollering at the monster kitty. (Notice her name change as I get into this). I bought a huge roll of black vinyl which I am going to reupholster the arms, sides, and foot rests on my furniture, that is the least I can do, right? Oh, bother!!! Bad kitty!! It is one thing to train a toddler, their brain gets smarter. But a cat!!?

Using our situation with Bailey, i think about habits and people. Habits are hard to break. When it comes to the sound of our conversation, the volume you are used to hearing will often be the volume you will use as an adult. It becomes the norm for your life. The volume of our communication can also be a cultural thing. I have a friend who often speaks in whispers. Yes, she really does. I love it. It is like our conversation rests on cotton balls.

A still small voice. I often say to myself "can I quiet down enough to hear God speak"? If he spoke to me would I recognize his voice? Would I argue with him and demand my own way?

I am planning to reupholster my furniture soon, yes, very soon.