This was no walk in the park for the Fantastic Fifteen 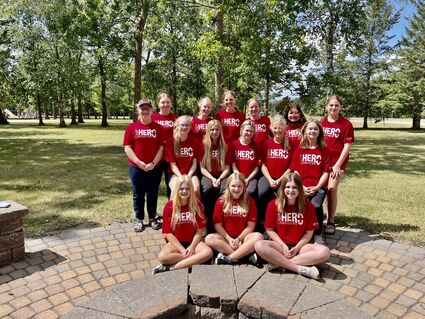 The first ever Camp HERO was held on August 9 through August 12 at LifeCare Medical Center and other locations in Roseau for 15 girls in the eighth through tenth grades.

This specially designed, hands-on camp has been created to help girls develop courage, gain confidence and build character, while introducing them to emergency medical services. This program was sponsored by a grant through Northwest Minnesota Women's Fund.

It did all of that.

Camp HERO provided these young ladies with a variety of training, according to Deb Haugen, the Director of Community Relations for LifeCare Medical Center.

The purpose of the program is to encourage girls to go into emergency medical services.

"They have accomplished their Red Cross, First Aid, and CPR certification," she said, noting that the girls were also instructed in the use of an automated external defibrillator (AED).

They also were instructed on Stop the Bleed training, met with the Roseau Volunteer Fire Department, and toured many of LifeCare Medical Center's departments.

"They spent quite a bit of time in our Emergency Medical Services garage, talked to paramedics, toured the medical helicopter, did team building with Kathy Magnusson, and toured the operating rooms," said Ms. Haugen, adding that they also learned wilderness training skills on Thursday, the final day of Camp HERO.

Addy Heppner, a ninth grader, was excited on the final day of training on Thursday, August 12.

"We learned CPR at the hospital, which is very exciting because we could save somebody's life," she said, adding that it is invaluable because it could give the injured a better chance of survival.

"On Monday, my group learned how to stop the bleed before you can get the person to the hospital," she said, still delighted about their training with the fire department.

"We got to hold the hose and feel how much pressure there is holding it for a long time, and there is always someone at the fire truck controlling the pressure. Everybody has certain jobs with the fire department."

Would you ever want to be a volunteer firefighter?

"I think it would be kind of cool, and it would definitely look good on your résumé," she said and giggled.

Looking ahead, she wants to work in radiology or ultrasound.

Ninth grader Brieta Vatnsdal was appreciative of the four days of training.

"It's really cool to see how the community has come together for this - between the EMS, the fire department, and all around the hospital," she said.

What was the best?

"My favorite part was the fire department because my dad, Neal, did the training. I got to be with him and see what he does."

Samantha Peterson, a sophomore, was excited on the final day.

"I learned a ton of stuff. The biggest surprise was just learning how many different things are in our hospital, and how many services we can offer," said Samantha.

She was informed that there's never been a female volunteer firefighter in Roseau.

"It would be so cool to be the first one," she said, remarking that the fire department has already had more than 65 calls this year.

"Kind of. I've always wanted to be a nurse anesthesiologist. That's been my main goal."

She was also impressed with the dispatchers at the Roseau County Detention Center.

"I never knew anything about that - like the whole mapping thing and, when you call them, they can see your location."

"It's been really fun, and I learned there are wire cutters on helicopters. So, if they run into wires, they clip them off.

"Stop the bleed," she said.

On Thursday afternoon of the final session, Don Dunn, the EMS Director at LifeCare Medical Center, pronounced the first ever Camp HERO a smashing success.

"This is an excellent program for the girls. They get all aspects of medicine down to wilderness survival and first aid," he said.

Mr. Dunn noted that the girls learned to build shelters, construct litters to carry a wounded person, and were instructed on how to get water from a tree.

Mr. Dunn, who spent 22 years as a medic in the Air Force, credited the girls with being apt learners during the wilderness training that was led by EMS Shaylin Kartes.

Keith Okeson, the CEO of LifeCare Medical Center, stepped out of his vehicle shortly after 2 p.m. last Thursday.

He had arrived to present the certificates to the young ladies and recalled that they had intended to run the camp a year ago, but it had to be cancelled because of Covid.

"We're glad this year that we're able to host it. It's really about education and exposure, teaching the students about emergency preparedness, EMS, what we do at the hospital, and fires," he said, encouraged that some of these students may want to work for LifeCare Medical Center someday.

"It's a good experience for them," said Mr. Okeson, adding that LifeCare learned of the program through a grant in another location.

"We decided it would be great to provide this kind of education and exposure for the girls."

Is this a possibility for next year?

"I have to admit that I haven't been deeply involved with the planning or even the hosting of it, but I would hope it would be something we'd do every year."