You can never turn back the clock, but you can wish 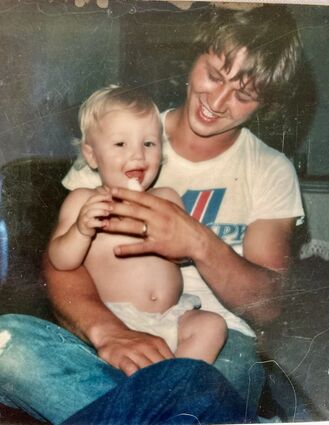 Give me one more day to spend with my dad, who never met my wife and my kids or knew that I had moved up here to his old stomping grounds.

Give me a whole day with Jeff Dolan, an Irishman I went to grade school and high school with. We were drafted into the Army on the same day.

He was intellectually and athletically gifted, always charming, the ladies loved him, and he worked as a lobsterman out in Maine for a while before he settled into an easier occupation.

When he was in his early sixties, he began suffering from depression and shot and killed himself.

I had talked with him just days before he took his life. He didn't say anything about suicide, but he didn't seem to be himself.

I lost a brother.

Give me another day to spend with Lyle Lisell, who died of colon cancer on May 22, 1981.

He was simply the best.

Before the cancer, he'd had a perfect life - a beautiful wife, Karen, and two young children, and they lived out in Malung.

It was a sad time.

Before he got sick, he was full of life and fun and charm.

I remember one time when we were cutting some jack pine together. I had mentioned that I didn't think one particular very alive tree was on my property.

"It's okay if it's dead," he said as I watched him falling that very healthy tree in the spring of '73.

He laughed and said, "It's dead once it hits the ground."

He was one of the very best I've ever met.

When he and Karen got married, I bought them a double-bladed axe and suggested they give each other a whack whenever they felt like it.

I bought it from Normie Flagstad at his old man's hardware store. He grinned when I asked to have it gift wrapped since it would be a wedding present.

It was a theft of a fine life, stolen from the hearts of his parents, Dalton and Gloria, who were the salt of the earth.

Both later died from cancer.

Life can be cruel.

I have written columns with both sadness and appreciation like when I wrote about the remarkable Hannah Dieter, who was killed in a car accident at 19 in 1999.

She was beautiful, sassy, full of mischief, and I would learn later that she had a premonition that she'd die young.

In her particular case, God received a much too young angel.

In this newspaper business, which includes columns and features, you are able to share memories of many wonderful characters.

For instance, when I first bumped into the late Gertie Olson, she was my supervisor at Marvin Windows.

We didn't hit it off.

I thought she was an old battle-axe, but she always played it straight and gave me hell when I had it coming.

There came a time when I had to choose between her shift and another female supervisor's shift.

Gertie, then in her late sixties, said, "I suppose you want to work for the other gal."

There wasn't even a pause.

"Hell no, Gertie. I'm sticking with you."

We became great friends. Sure, she still gave me hell occasionally, but it was with a smile.

I believe her husband's name was Carl, and they'd drive out from Warroad to visit us.

I wrote at least one article in the Times-Region on this really amazing woman.

I told her one time that she reminded me of my old drill sergeant.

And that's how she ran her department - kicking ass and taking names.

She was a tough old girl and I loved her.

The worst thing with writing this column, which I absolutely hate more and more, is that you end up sharing your personal views.

You can't play it safe every time.

I've tried to explain that opinions are like assholes.

Or ever read it.

Don't agree with a word of it.

But I don't get fuming mad at what comes out of his head.

I just consider him the village idiot while he has written that I am a liberal, left-wing nutcase or whatever it was about a month ago.

He has his followers.

Wouldn't want him to buy the farm.

Last week, I was waiting for the news to come on WILD 102 radio, and Craig Olson and his female guest brought up the recent issue that gun rights activists want to be allowed to carry concealed weapons into the Minnesota State Fair.

The fairgrounds are packed.

Can you imagine somebody pulling out his piece and start shooting?

The Second Amendment has to have some limitations.

Like not packing a piece in public places where the sudden eruption of gunfire can kill innocent people.

Sure, you have a right to carry a piece but leave it at home or in the trunk of your car.

Don't bring it to the Minnesota State Fair starting this week.

If you're afraid you're going to get mugged, you don't belong there.

I think America has a rage problem.

Where's our sense of humor?

People get so angry about being told to wear masks.

In an Associated Press piece, there were two opposing views on mask mandates.

The first quoted Budhiono Riyanto, 37, of Queens, New York, whose 7-year-old son, Gabriel, will be required to wear a mask in school.

To contrast that, the AP article quoted Kim Oldfield of Jessieville, Arkansas, who noted that masks aren't popular in her area and she is opposed to mask mandates.

"America is supposed to be the land of the free," said Oldfield, 70. "And when the government starts getting into your personal life and making you do things that you don't want to, people don't like that."

Just ask those women who are denied access to abortions because of the many state government mandates.

Educate your kids at home.

All over the world, whatever the type of government, those in charge are trying to contain this pandemic.

They're dying in Alabama, Mississippi, Texas, Florida, Louisiana, and elsewhere.

And it ain't the flu!

I don't want to lose any friends or enemies. You can die from this even if you're white and young.

Remember: They sell condoms because they help prevent pregnancies and sexually transmitted diseases.

Think of masks and vaccines in exactly the same way. So, slap on the mask and take the jab!