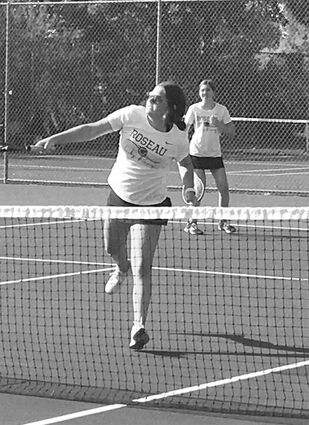 Karli Wensloff slams an overhead while Ava Hass looks on from the baseline during their win in the 5th place match at 3rd doubles in the Perham Tournament.

The Roseau Girls' Varsity Tennis team opened the season with a new-look lineup. After graduating 12 seniors last year, the Rams put a lot of new faces on the court in the opening weekend and gained some valuable experience.

Although thunderstorms in Moorhead put a stop to the North/South Challenge Quad on Friday, August 20th, Roseau was able to sneak in an indoor match against the Moorhead Spuds at CourtsPlus in Fargo. Moorhead's match experience showed in this early season contest, as they dominated play in a number of spots en route to a 6-1 win. For Roseau, t...