A Three Letter Word That Changed A Man's Life – Forever! 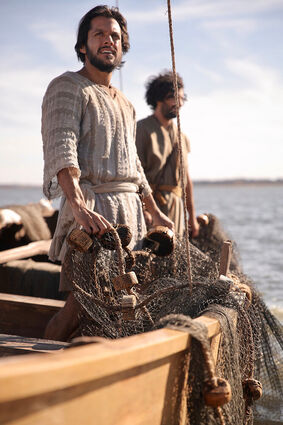 One of the greatest conversions in the history of the Christian Church was the apostle Paul (Known as Saul at the time of his conversion). Whenever I wobble in relationship to the power of God to "save souls"; even my own soul (which happened when I was 18) I go back to the word of God (No Higher word than that) and read about Paul's conversion in Acts, chapter 9.

No one has ever been more vehement against Jesus and the Gospel than Paul. In Acts 7 about the stoning of a young man by the name of Stephen by the religious leaders who were furious about his testimony for Christ. In Acts 7:59 we read: "While they were stoning him, Stephen prayed, "Lord Jesus, receive my spirit." then he fell to his knees and cried out; "Lord, do not hold this sin against them" (Jesus prayed the same thing from the cross). "When he had said this he fell asleep"(NLT: And with that he died). Acts 8:1 says that "Saul was one of the official witnesses at the Killing of Stephen." Now one might think that Saul would have been deeply moved by Stephen's dying words. But, no, he wasn't as we will see in Acts 9.

In Acts 9: 1, 2 we read: "Meanwhile, Saul was uttering threats with every breath (from a spiritual standpoint we could say that Saul had "bad breath!"). What do the words of your breath reveal? Acts 9 continues: "He was eager to destroy the Lord's followers, so he went to the high priest. He requested letters addressed to the synagogues in Damascus, asking cooperation in the arrest of any followers of the way he found there. He wanted to bring them, both men and women, back to Jerusalem in chains."

But! But! In Acts 9: 3-6 we read: "As he was nearing Damascus on his mission, a brilliant light from heaven suddenly beamed down upon him! He fell to the ground and heard a voice saying to him, 'Saul, Saul, why are you persecuting me?' Who are you sir (Lord)?'" Saul asked. "The voice replied, "I am Jesus, the one you are persecuting! Now get up and go into the city, and you will be told what you are to do."

Now here's the three-letter word that led to the change of Paul's life. It came from the lips of Jesus: "Why...?" He challenged Paul right to the core of his being. Now I want to suggest here that Jesus wants to have a personal encounter with us when it comes to receiving and following Christ as our Savior and Lord. Now he may speak through someone else, moving them to speak his word to someone (as he did through a humble follower of Jesus, Ananias-- see Acts (: 11-19). Never think that you don't hear from Jesus personally. He Knows you by name and by heart like he did Saul.

Now Saul had fallen to the ground when Jesus confronted him, but we read in Acts 9:8 "As Saul picked himself up off the ground, he found that he was blind." This is talking about physical blindness, but when we are personally confronted by Jesus over something – maybe salvation- we discover that we have been blind in relationship to Jesus and his will for us. Only he can restore our spiritual eyesight. Paul would later confirm this.. Jesus changed his life forever!

So what is the point of all of this? I want to face you with a question (and don't get hung up on the word, "persecution"): If you have not received Christ as your Savior; if you're not born again even though you've heard the Gospel many times, Why Not? What is keeping you from Jesus? Will you continue on like this even after hearing this question? If so, why? I think Jesus is calling some of you to account through what I have felt the holy nudge to write about. Has Jesus been speaking personally to me about the state of your soul?

Now on the subject of salvation I want to raise up another question Jesus asked before he left for heaven after his resurrection. This one was directed toward Peter and it was more than one word.

Here's the scene as recorded in John 21. Several of the disciples are gathered on the shore of the Sea of Galilee. John doesn't tell us why. Suddenly Simon Peter announces: "I am going fishing!" Now Peter hasn't been fishing since Jesus called him to be one of his disciples. What's going on here? Could the meaning behind Peter's statement mean: "Well it's all over, I'm going back to fishing!" They'd had their three years with Jesus and now it's time to go back to fishing? We don't know for sure but maybe Jesus will help unpack Peter's statement. Now here's a statement we don't want to miss. The other disciples responded: "we'll come too" (John 21:3). We may never know the impact that our decisions in life may affect others. We better know where we're going and why; we may have a following!

So they fished all night and "caught nothing", but guess who showed up while they were casting their nets. John 21: 4: "At dawn the disciples saw Jesus standing on the beach, but they couldn't see who he was. He called out, Friends, have you caught any fish?" No, they replied." We never know when Jesus might show up and join us where we are.

So he tells them to throw their net on the other side of the boat and they hit the jackpot. 153 fish! (Verse 7: Then the disciples whom Jesus loved said to Peter, "It is the Lord!" That's all Peter needed. He jumps out of the boat and swims for shore. Jesus already has a fire going and invites them to have breakfast with him; they can even add some of their own fish to the fry.

Because when we give our lives to Jesus he calls upon us to leave our old life behind (not necessarily our vocation) and live a progressively New Life serving Jesus: Especially by caring for others. Every day I pray: "Lord, for this day, give me your eyes to see, your ears to hear, and your heart to bring the light and love of Jesus to everyone I meet and interact with."