Rams Ramp Up Their Season 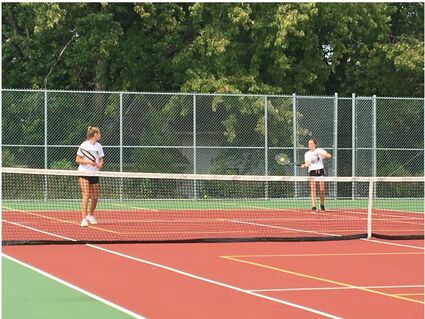 Marissa Glodowski (right) plays a drop shot against her opponents while partner Emma Johnson (left) looks on during on of their matches at 2nd doubles.

In Roseau's second week of the tennis season, the varsity girls had a busy schedule of tennis, starting with some tough Section 8 opponents and finishing with a successful trip to the Twin Cities.

In a Section 8 triangular in Crookston on Tuesday, Aug. 24th, Roseau faced two top teams in Crookston and East Grand Forks. In the opening match against Crookston, the Rams saw just how good the Section 8A favorites are. The Pirates beat the Rams 7-0 and were in control in every match. For a young and inexperienced Rams team, it was an up-close reminder of the progress they need to make to work their way back to the top of the section. It was a similar story in the matchup with East Grand Forks, who have been moved up to Section 8AA this season. The Green Wave also got a 7-0 win over Roseau, but the Rams were more competitive in these matches and looked like they'd already learned something from the loss to Crookston earlier in the day.

For the second straight week, the Friday portion of Roseau's weekend trip had to be adjusted due to wet weather. Although their matches with Glencoe-Silver Lake and New Prague were rained out, the Rams were able to get some indoor court time at Sta Fit in Sartell and met the Panthers from Glencoe in an indoor match. It was once again a sign of improvement for the varsity team as they played their most consistent tennis of the year and were rewarded with a 7-0 victory, their first win of the season. It was clear that positive progress was being made by the team as Maddy Verbout, Erin Brandt, Jessie Danielson, and McKenzie Reed all got singles wins and the doubles teams of Marissa Glodowski/Emma Johnson, Karli Wensloff/Kali Wibbels, and Kate Kennedy/Kylie Winkler also swept their matches.

The weather turned wonderful on Saturday, Aug. 28th and the Ram girls finished their weekend with a Saturday tournament on a warm, sunny day in New Prague. The always-strong field featured five Class AA teams. In the tournament, both Roseau's first and second doubles teams were placewinners. At 1st doubles, Jessie Danielson and Erin Brandt were very consistent in their wins over Apple Valley and Jordan to advance to the championship. They also played very tough in the championship match against Lakeville South, but took a close loss and finished in 2nd place. In the 2nd doubles bracket, Marissa Glodowski and Emma Johnson opened the tournament with two very close matches. After getting down 2-5 in the opening set, they came all the way back to win their first match over Hopkins. In their second match, against Apple Valley, they split sets and then lost in a very close tiebreaker to put them in the 3rd place match. Facing off against tournament hosts New Prague, Emma and Marissa were able to bounce back and get a win to finish 3rd.

Roseau's varsity team will finish off the summer portion of their season with an overnight trip connecting three dual matches. They will face Wadena-Deer Creek, Pequot Lakes, and Perham before heading into a break for Labor Day weekend.