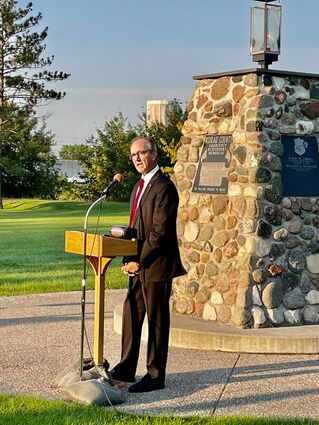 It wasn't just another Saturday to Mitch Norberg, who was in the first grade when the World Trade Center's Twin Towers were attacked by terrorists who had hijacked four passenger planes on September 11, 2001.

Deputy Sheriff Norberg of the Roseau County Sheriff's Department is now a first responder himself - much like all those who rushed to the rescue after the terrorist attacks.

"I remember everything being on TV in my classroom," he said, adding that it's a honor to participate in the remembrance of 9/11.

An estimated 50 to 60 were in attendance, and there would have been more if the word had gotten out to the community.

Various first responder vehicles with their emergency lights flashing were lined up along the street directly east of the Veterans Memorial Park.

Prior to the program, the flags were lowered to half staff in honor of those who died on September 11, 2001, in service to mankind.

Mayor Dan Fabian kept checking the time. He then requested a moment of silence and reflection.

He encouraged the attendees to reflect on the sacrifices that first responders make every single day.

At precisely 7:46 a.m., a bell rang three times in memory of Richard K. Magnusson, a Roseau County Deputy Sheriff who had been murdered while on duty on August 2, 1976; Robert H. Lobdell, U.S. Border Patrol Inspector, who had lost his life while on duty on December 25, 1928; and Terry L. Pearson, an emergency medical technician who died on January 4, 2005.

Next, Pastor Joe Elick stated that Roseau still represents what America stands for.

"And we're grateful for that. And we want to be a part in any way we can to keep our country great and keep it protected, and keep it the way God designed it to be."

He singled out the first responders.

"They give their lives in protection of us. Oh, Lord God, we thank you for each of them. Let us not live any day without remembering that there are those out there caring for us and protecting our lives."

Mayor Dan Fabian, a former state legislator, thanked a number of individuals for their assistance in honoring Mr. Magnusson and Mr. Lobdell.

"In particular, I want to thank Bob Tuttle for his help along with Roseau County Sheriff Steve Gust, State Representative John Burkel, and State Senator Mark Johnson," he said, mentioning that in the not too distant future, signs will be in place honoring these two heroes.

"Bob and I started working on this project in 2019 but couldn't get it across the finish line in the legislature. Thanks to some diligent work in this past legislative session, they were able to get that done."

In his speech, Mr. Fabian explained the significance of 7:46 a.m. Roseau time.

That was the exact minute when the first hijacked plane, American Airlines Flight 11, intentionally crashed into the North Tower of the World Trade Center on September 11, 2001.

"Thank you for being here today to show your support for our local first responders. That's what this is really about - thanking them for what they do," he said, recalling that just the day before he had realized the next day would be the 20th anniversary of 9/11.

"We didn't have an event to commemorate one of the most tragic and incredible days in American history," he said, noting that he made a number of phone calls to get the ball rolling for Saturday's remembrance.

"We are here to remember the first responders who did the most incredible thing 20 years ago today. They charged into the World Trade Center Towers to try to help and rescue those remaining inside," he said, adding that they knowingly put their lives on the line to assist others.

He noted that on September 11, 2001, approximately 500 firefighters and law enforcement officers, and 55 military personnel gave the ultimate sacrifice in the World Trade Center, the Pentagon, and that farm field in Shanksville, Pennsylvania.

Mayor Fabian remarked that anyone old enough to remember that day has vivid memories. He mentioned his memories of that day when he was driving to school with his son, Jason.

"I knew right away it was a terrorist attack and not some small plane. We all asked ourselves what kind of people could perpetuate such an evil."

He had a captive audience.

Members of the Roseau Volunteer Fire Department and various law enforcement personnel from local cops to sheriff deputies to state troopers to the U.S Border Patrol were on hand when Mayor Fabian directed his comments to them.

"Today, I want all of you to make sure our first responders can hear you when you say 'thank you' for their service. Please join me in a show of appreciation and thanks to all our firefighters, EMS personnel, law enforcement officers, and healthcare providers. Thank you for the service, care, and protection you provide, and for the sacrifices you make in service to all of us."

There was a nice round of applause for the local first responders.

The program ended with the taped singing of God Bless America.

"Thank you so much for being here this morning," said Fabian. "May God bless all of you, Roseau, and America."