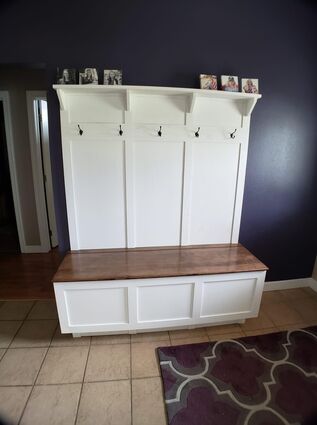 Similar to many other bored citizens during the peak of COVID-19 and the infamous quarantine, Casey Wagner decided to follow through with a life-long hobby. In May of 2020, Casey established "Wagner's Woodworking" in order to keep himself busy, while still "helping with the kids more at home," he said. Since then, his creations have only grown and continued to spread.

It all truly started when Casey joined the shop class in high school. "I did woodworking in shop class and never really lost the itch for it," stated Casey. He graduated from high school and began working in a cabinet shop in the fall of 2006. Casey continued working in similar shops for about six years. He shared that he worked in three different shops, located in: Thief River Falls, Kindred, N.D., and Viking.

After a busy six years in the cabinet business, Casey began working construction during the summers. "I had my winters off where I still did some projects when I could," he said. His passion for woodworking always remained fairly clear.

The state shutdown during the Coronavirus gave Casey a chance to head back to his roots. "I needed to help with the kids more at home, so I went back to what I knew and started getting the shop set up to stay more flexible," he said.

Casey continued to answer some questions based on the vibe of running a small business in the community of Roseau. He mentioned, "like any other business, it can be stressful for sure when just starting up, but everything is starting to fall into place." Casey shared that, as time goes on, more and more orders are reaching him. He also listed support as a key factor in his small business, "It helps to have support from my wife (Amanda) and her family."

Monica Burkel, Amanda's mother, operates Past Treasures in downtown Roseau. Casey stated "I have built some things, as well as fixed some furniture in the store." Casey is currently spending time over at Lee's Woodshop, a few days a week. However, he is in his shop the rest of the week. Another major source of help he mentioned was Waterworth's Woodshop. He stated. "they have been a big help with information and referrals."

Casey has known them since he was a kid and has learned a lot along the way.

Casey has a lot of experience in woodworking, but is still aware of the amount he has yet to learn. He is continuing to put his items out there in order to attract attention towards the tangible items versus customers just seeing them on paper.

Casey shares his highlights on his FaceBook page "Wagner's Woodworking".