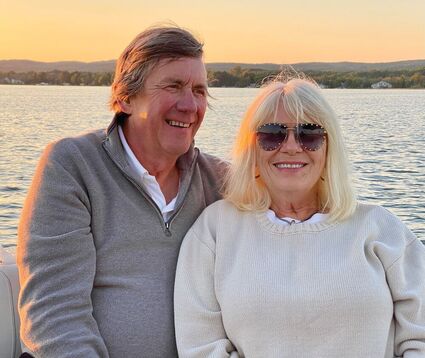 Bill and Judy celebrating their 47th wedding an anniversary this fall

Judy Pearson, a 1963 Roseau High School graduate who had a hankering to see the world and she did, belongs on a Wheaties box.

She has a flair for doing challenging and unusual things far off the beaten path.

Still, she keeps making annual pilgrimages back to Falun Township, which has gravel roads, old barns, and homespun ways.

These are her roots, and it's her little piece of heaven.

She is 75, grew up on a farm not far from the northern edge of the Beltrami Island State Forest in Roseau County, and once was told to promptly leave a certain Southeast Asia country.

It's a good bet she told some engaging bedtime stories to her three sons, regaling them about having served in the Peace Corps, skydiving, and meeting their daddy.

So, how did a farm girl end up doing such extraordinary things?

Possibly, being tagged at birth as Judythe Ann Pearson had something to do with her adventurous spirit.

Speaking by cellphone in September from Falun during a home visit to her brother Wayne's place, Judy noted that she occasionally got bored in her high school classes.

Instead of doodling, she began jotting down future goals.

"I made a list of milestones that I wanted to achieve in my life before I died. I achieved all but one - working as an airline stewardess."

She just might find an airline that caters to geriatric travelers. The airline might require a captivating woman who can relate to a salty bunch of old codgers.

She laughs often, sounds almost like a twenty-something, and was asked about her unusual first name - Judythe.

She recalled how her mother, Margaret Pearson, an educator, and Mrs. Engebretson were in the maternity ward at the same time.

"They both wanted the name 'Judith' if they had girls. Thinking their daughters would be in the same grade, they agreed that whoever gave birth first would get the traditional spelling while the other one would have to come up with an alternative."

"I was born after Judy Engebretson. Hence, I've gone through life with Judythe."

She probably never said, "Mom, how could you do that to me?"

It has an usual ring to it, but the two girls weren't destined to be in the same RHS graduating class.

"I skipped the second grade, so it turned out that Judy and I weren't in the same grade after all."

Possibly, jumping out of airplanes wasn't initially on her to-do-list, but it makes sense.

She loves challenges that push her to the limits.

"The funniest moment happened when I was paralyzed during my first skydive," she said, recalling that she was frozen to the plane's platform, and the pilot had to keep circling over the target area.

In his exasperation, he yelled, "JUDY THE! STEP OFF THE PLATFORM NOW!"

"Yes, I jumped! I missed the target and landed close to a farmer working his field. It probably took a few years off his life," she said, noting that she was 23 and that first jump was the start of her love of skydiving.

Judythe Ann Pearson spent her twenties working on other milestones.

She graduated from Bemidji State College in 1968 and immediately began her eastward migration.

From 1968-70, she taught English and music at an inner-city school in Connecticut, a great way to get her feet wet in her new profession.

"During those two years, I oversaw weekly sit-ins by my Black students, who rewarded me with stunts such as throwing my bicycle in the river and twice hauling it up a tree."

Next, she joined the Peace Corps and was stationed in the Philippines.

"I lived with a Filipino family in San Pablo City where I trained teachers at Laguna College and taught children in barrio schools."

Nobody messed with her bicycle!

She was in no rush to return to Minnesota after her two-year tour with the Peace Corps ended in 1972.

She was young and wanted to see the world on about $2 a day.

"I traveled throughout Southeast Asia and met my future husband in Thailand. When I got thrown out of the country because my visa had expired, I went to Nepal."

Of course, she would.

She wanted a stab at Mount Everest if only to set foot near it.

She did more than that.

"I trekked up to the Mount Everest base camp and almost made it," she said, remarking that she had reached 17,000 feet and the base camp was at 19,000 feet.

"I had pulmonary edema and I almost died. The guy I was with put a paper bag over my head and took me down about a thousand feet. I was okay then. It was quite an adventure."

These days, she hails from Harbor Springs, Michigan, and is retired after 30 plus years as a full professor at the University of Toledo where she taught aspiring teachers how to teach reading.

Earning her doctorate was also on her list of milestones.

They clicked and she stayed for a month.

"He joined the Peace Corps because of Vietnam," she said, acknowledging that his lottery number was 23, which meant that unless he knew a doctor who could conveniently find some exotic medical ailment to get him declared 4F, he would be drafted.

Thus, the Peace Corps was an acceptable alternative with the Selective Service System since he would serve the U.S. government for a two-year stint.

"He taught English as a second language in Thailand. We always say that I went into the Peace Corps for altruistic reasons wanting to save the world, and he went in to avoid being drafted and sent to Vietnam."

On September 1, they celebrated their 47th wedding anniversary.

Scratch off another milestone as Judy earned her PhD in Curriculum and Instruction from the University of Minnesota in 1976.

"Bill is a retired environmental lawyer and grew up on the East Coast in New Jersey, and I grew up here," she said, adding that their three sons had a wonderful upbringing because they had the cultural aspects of life in New Jersey and the farm life in Falun.

"I am so in love with the farm and come up at least once a year to rejuvenate my soul."

Their three sons are also exceptional.

"Bill lives in Phoenix and is on a team that sells Internet security systems, Zach lives in New Jersey and is a tugboat captain, and Jon is a doctor out in San Francisco," said the grandmother of three, still marveling at life's interesting twists and turns.

Some of the credit goes to her parents, Roy and Margaret Pearson, who didn't apply the brakes on their spirited daughter.

She is an author and a memoirist.

"All my book are self-published memoirs except for one professional book," she said, adding that her favorite family memoir is We Just Shoveled Two Feet of Partly Cloudy - which is not on Amazon or Barnes & Noble.

"I've never been interested in marketing my books. I don't believe they have any broad market appeal."

That is a shame.

At 67, she hiked rim-to-rim-to-rim in the Grand Canyon.

It's in one of her memoirs, and it was truly the trek from hell.

"I walked 45 miles and ascended and descended a total of 23,000 feet. I endured brutally cold temperatures, sleeplessness, and hard work for six days, and my body rebelled only at the end," she said, adding that she carried a 30-pound backpack while keeping up to her much younger fellow hikers.

She'd trained for a year - very physical training - and she did the Grand Canyon hike the first week in December.

"I wanted to find out if I could still push my body to do things like that.

You know, after you retire, you feel like, 'Am I really going downhill or can I still do some of the things I did when I was younger?' I did it, and I'm really happy."

"I've climbed in the eastern Sierras, the western Cascades and in the Rocky Mountains."

Next year, she plans to hike the Acadia Mountain Trail in Maine.

"I have been to so many places and had so many experiences, but the best place is this farm. It amazes me that, of all the things I've done and all the places I've been, my favorite place is the Minnesota farm."

While she's not a deer hunter, Judy loves the atmosphere at their deer camp.

"The Pearson hunting camp is called the 'Jaktstuga.' Bill and I go there every year for opening weekend, usually with one or more of our sons, plus our grandchildren. I think venison is delicious," she said, adding that her brother Wayne makes tasty venison jerky.

Jaktstuga is Swedish for a hunting lodge.

And her husband, Bill, is not a skydiver. He prefers listening to the wheels hitting the tarmac before he departs a plane.