This Remarkable Margaret Is A Medical Marvel 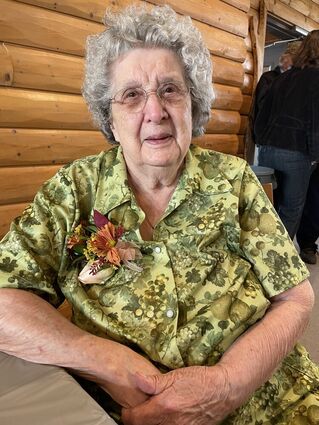 Margaret (née Meyers) Geroy, one-hundred-percent German and the daughter of John and Marie Arens Meyers, is no gadfly.

She is a woman who does not babble. So, please pay attention.

Last Saturday at the former Eagles Club in Roseau, she received relatives and admirers like the United Kingdom's Queen Elizabeth.

Only, the queen was raised in splendor while Margaret was properly raised sitting on chamber pots - also known as "Thunder Mugs" - or hiking to the outhouse out in the Beltrami Island State Forest.

Idle chatter is not her game, and she was asked if she ever imagined she would live long enough to celebrate her 100th birthday on October 28.

Oh, her hearing is fine.

Still, she shook off the question like it was nonsense.

She was asked about her mother and if she lived a long life, too.

"Oh, she was only in her forties. She had an operation in Warroad, and it was in the Thirties and the buildings weren't very well heated. So, she got cold and died from pneumonia."

Just like that, she briefly shared her life, mentioning that she grew up in Elkwood Township about three miles or so from the Winner Silo.

There were four kids in the family (three girls and one boy), and she was the youngest of three sisters and her mother died when she was 10.

But there is longevity in the family. Her sister Louise lived to 102.

"She was married to Oscar Hendershot," she said and then smiled when asked if she went to Roseau High School.

"We didn't go that far because there was no bus at that time," said the 1921 model, who married Clayton Geroy in 1939 and don't bother asking a dumb question like where they went on their honeymoon.

Those were tough times.

"We were married about 45 years," she said, and laughed when asked the date of their wedding.

It was a lifetime ago and Margaret, who has this terrific smile which instantly disappears when a cellphone is produced to take her photo, shared that she and her husband, Clayton, had sold the land on which the Farmers Union Hall is now situated.

"We moved to Roseau because my husband was doing plumbing work," she said, recalling that she worked as a custodian at Roseau High School for about a dozen years.

When did you finally retire?

How come you look so healthy and happy for a girl of one hundred?

"Well, maybe I didn't worry about every little thing."

She goes to bed every night between 9 and 10 and always takes an afternoon nap.

"The thing I know the most about Grandma is her amazing ability to grow things in her garden. She learned from her mother. I guess between the two ladies, we've got a 150-year-stretch of gardening experience, which I have totally been able to benefit by. If I ever have a question, I don't Google it. I call my grandma first."

The scouting report on Margaret Geroy is she hears well, sees well, and doesn't look a lot different at 100-years-old than she did at 80-years-old or even 70.

"She's amazing," said Jill, recalling that when Granny was 86, she had a nasty fall on some ice on the sidewalk near the Guest House.

"Mom took her to the hospital and she did have a broken wrist," she said, noting that they made an appointment with Dr. Clayborne in Grand Forks.

"I took her there for surgery," said Jill, recalling that her medical records from the Roseau Clinic seemed incomplete.

"I came back to take her home, and Dr. Clayborne came in and asked, 'Margaret, how are you doing?' and she said, 'Fine,' and he pulled up a chair and sat right down beside her."

He opened her chart and commented that she is 86-years-old.

Grandma Margaret fessed up that she took an occasional aspirin.

Dr. Clayborne said, "I see a lot of people. I haven't seen anyone 86-years-old who has two pieces of paper in their medical records and just takes aspirin."

He then inquired about her life, according to Jill, who conducted a 90-minute video interview with Margaret last year.

"She lost her mom when she was 10-years-old, and she grew up in the Beltrami area. It was literally a case of Mom got sick one day, Dad drove her to the hospital, and she never came back."

There were other setbacks. The next year, their house burned down.

"And then she went to live with her sister, Katie, who was 10 years older. I don't think she had an easy life based on what she tells me. It was difficult for people living in that area.

"They didn't have a lot of money. Everybody had a garden and got their own food. That was survival," she said.

Still, Jill was surprised when she interviewed Grandma last year and the topic got around to the present generation.

"She got really teary-eyed when talking about the kids today. She said, 'Kids today, they don't have a chance. It's tough to be a kid today,' and her eyes got really teary."

This woman, who suffered numerous childhood setbacks, never saw herself as disadvantaged.

"We had a hard life, but we had a good life. Our life was good, and these kids don't have it good," she told Jill.

The deal is, the old girl with a soft heart is no slouch. Take her blueberry picking, and she's likely to kick your slow-moving butt.

Jill was standing with her husband, Randy Olson, inside the old Eagles meeting room just a few yards from Margaret.

"She was 93 and we took her blueberry picking," said Jill, mentioning that her grandmother, who was out-picking her, had some friendly words of advice.

"She gets mad at me because I'm careful when I pick because I want the bucket clean. I don't want to clean them later."

"You go too slow! You can clean them later!"

"She says you know why those Norwegians don't live very long? They eat too many potato dumplings!"

She can be a tease.

"Her two older siblings were born in Germany and Margaret was born here," said her granddaughter.

These days, Margaret Geroy hangs her hat at Northern Horizons, a residence for elderly folks.

"Yes, we get one meal, and I cook the rest," she said, adding that because of Covid, they are limited to one guest at a time.

Last Saturday, she had a roomful of friends and family.

The following recollection was recorded by Jill Pederson:

The following are stories from my life as I remember them, or were told by my parents and family.

Our family migrated from Germany in 1912 to Canada, settling in Winnipeg. My older sister, Katie, and brother, Johnny, were born in Germany and traveled along. Dad worked for a farmer for a short time, then we crossed the border into North Dakota to the small town of Kenmor just west of Minot. My sister, Louise, was born there. Dad worked on a farm and Mother did housework and cooking. Katie started school there.

Margaret told Jill she wanted her family history up-to-date because Helgeson Funeral Chapel would need that for her funeral.

Margaret is very much alive, and there are plenty of stories to fill more than one page on the life and times of this grand lady.