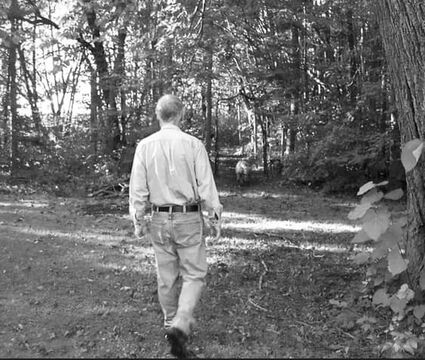 It happened so fast. Joe had a stent replaced in his kidney, oh the pain! And then because of the pain the bladder began to spasm. His bladder more or less said, "I've had enough of this trauma so I will just plain quit." After a second catheter, they wanted to do a test to check if the bladder had decided to work again. We went into the clinic at 4p.m. Joe had developed chills, and threw up his Ensure in the sink of the examination room.

Our wonderful nurse put him in a wheelchair and escorted him over into the ER. They sent him in for a CT Scan and blood work. All this happened on October 15. The details of the CT Scan showed a partial blockage in his duodenum. He had Whipple Surgery back in 2017, and scar tissue had developed in the area. It was also found that his liver was shrinking creating ascites. He also had Sepsis in his blood.

We were thinking that he would be shipped out to a bigger hospital. Because of the Whipple Surgery, Grand Forks wouldn't touch the problem. They said he would have to be sent to Fargo or Mayo. The doctor was not comfortable with shipping him out. She said because of the liver, surgery would be a bandaid over a really big situation, which had no promise of any fix. She told us that she was going to put him here in our Roseau Hospital and then have our primary care physician assess our situation.

I went into the hospital the next morning and our Primary Physician was at the nurses desk. He, in a very kind way, told me that because of Joe's liver, there was nothing more that they could do for him. I was ready to hear what he said and so was Joe.

It had been a brutal five months prior. In June 2021 Joe had started a very strong recipe of Chemo. He was to have 12 infusions every two weeks. He managed five and began to really fall apart. He had no appetite, major fatigue, nausea, and vomiting. They decided to give him a chemo break. On his break, he had to have his kidney stent replaced. Kidney stents cause wall pounding pain.

Like I said, it was BRUTAL. He would sit in his chair all day, dealing with intense weakness. Joe would cry every night saying how he dreaded going back on chemo. He said, "all I am doing is sitting in this chair all day doing nothing." He told me he really really wanted to go to Heaven. Joe went into the Roseau Hospital on October 15th, he went to heaven on November 5th.

I found the following poem that I feel explains the total extent of Joe's feelings.

I came to my Calvary

and the load I bore was too great for me:

The stones were sharp and pierced my feet.

And my temples throbbed with the withering heat.

But my heart was faint with the toil of the day

So I sat down to think of an easy way

Loomed sharply before me that tortuous trail,

No use to try I would only fail.

I turned back in sorrow, clothed with defeat,

For my load was too heavy: I would retreat

Yet a moment I lingered watching there.

As I held my gaze on that flinty side

A man came up to be crucified.

He toiled ALL THE WAY of that painful road

And the cross that he bore FAR surpassed my load

His brow with thorns was pierced and torn

His face had a look of pain and was worn

He stopped for a moment and looked on me

AND I FOLLOWED IN RAPTURE TO CALVARY!

Words of Wisdom from Pastor Joe: