A lot of reasons to be thankful 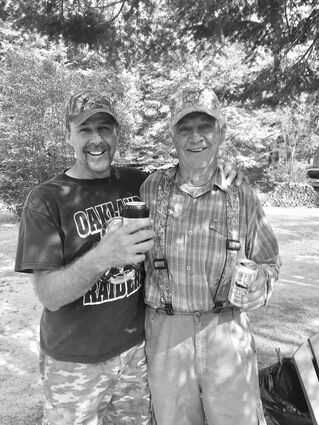 Gary Przekwas and Newell Broten in 2016

Take a look in the mirror.

Can you see your face?

Can you see that big zit?

But you can see.

You can see a sunrise, a new blanket of snow, the colors of your shirt and pants, what a cloud looks like, and even the smile on your dad's face when he greets you.

Sight is a remarkable gift.

I recently read the obituary in the New York Times on Ed Lucas, who lived an amazing life after becoming totally blind when a line drive scored a direct hit between his eyes.

He couldn't see very good before that accident in the fall of 1951 when he was 12.

Shortly, he saw nothing.

Years later, he became a legend as a blind broadcaster and, more importantly, as a very fine human being.

His autobiography is titled Seeing Home - The Ed Lucas Story.

Every day we wake up and bitch about something.

At least, many of us do.

Never mind that you can get out of bed, dress yourself, bound down the stairs, and feed yourself.

Some of us can't.

For some of us, life is tough and they can't do it alone.

They are quadriplegics and need constant assistance. These are the remarkable among us.

The ones who knew what an active life was before the car accident, a terrible fall, a dive into a shallow body of water, or ALS that destroys their bodies.

One day you're full of piss and vinegar, and the next day you're laying there trapped in a body that can't function.

Pity yourself for not appreciating the good life while you had it.

For one day, don't bitch if your spouse is complaining.

Maybe the old battle axe will get laryngitis.

It doesn't have to be Thanksgiving to count your blessings.

If nothing hurts or aches, you should be smiling. Every day, some of us hurt constantly.

If your kids or spouse or neighbors actually like you, what can be better than that?

To have friends, you gotta be a friend.

It's pretty simple. People don't like hanging out with moochers, chumps, and complainers.

My friends are generous.

It's a wonderful trait.

And they prefer generosity in their friends.

Gary Przekwas, one of my finest friends, frequently will remark whenever I show up with a case of his favorite Busch Light, "Beer always tastes best when Bro buys!"

That will be on my headstone.

You don't need a ton of friends. You just need a few good ones.

Take Troy Hammer, a Roseau volunteer fireman and a remarkable friend - even though we probably see each other every couple of years.

I can call him and he's always cheerful despite knowing I'm going to put him on the spot for a colorful quote.

Or take Ollie and Joanna Ullman, a Roseau couple and great friends.

Ollie, who now works for the Roseau County Highway Department, had earlier worked as a gravedigger for Helgeson Funeral Chapel.

He has offered to cremate me.

And then you toss in the Rose, and it's smiles and good times. Aaron Rose, like Gary Przekwas, can fix just about everything.

I'll drink a toast to that.

Many are celebrating the recent acquittal of Kyle Rittenhouse, 18, the lad who killed two men and wounded another in Kenosha, Wisconsin, when he was 17 on August 25, 2020.

They had to be a little stupid to approach Mr. Rittenhouse, who was armed with an AR-15.

The idea is to stay as far away as possible when you spot someone carrying a weapon.

Never mind that the AR-15 had been illegally purchased or that the kid should have received something like a year in prison for that offense.

Someone is at fault here.

Forevermore, her son is famous or infamous.

If she actually gave her blessings for him to go across state lines armed with a killing machine, she's a damn poor mother.

That's if he didn't sneak out and drive from Illinois to nearby Kenosha.

There are photos of him marching down the street that night with another young guy, patrolling the area like they were in a combat zone.

If only for about 10 minutes.

He's a hero to many and a villain to many others.

He killed those two men, who weren't choirboys.

They had done some bad things, according to Fox News.

Probably, Kyle Rittenhouse could walk into any bar in Roseau County - he'll be legal in three years - and he wouldn't have to buy a round.

The flip side of this scenario is there comes the time when he has to examine his own conscience.

To kill someone isn't like shooting a skunk or some other critter.

They are forever dead because they encountered Mr. Rittenhouse, who is being feted by at least two Republican Congressmen with potential job offers as a congressional intern.

And it's totally out of line.

There will be many late nights when he can't sleep because it will keep coming back to him that he killed two people.

The mind can be a dangerous thing. It never lets you rest, and there will be lots of what ifs.

What if he hadn't been so gung-ho to go to Kenosha with a loaded semi-automatic weapon?

And what if those three men had steered clear of him?

One thing is for sure.

He shouldn't have been there.

No way in hell.

Now, he is forever changed.

He can't be a normal kid.

Not even if his plans are to be a registered nurse - as has been stated in the media.

It just takes minutes to change your life forever.

To either do good.

Or to do harm.

I really feel bad for this kid. His life is forever changed because of one night. 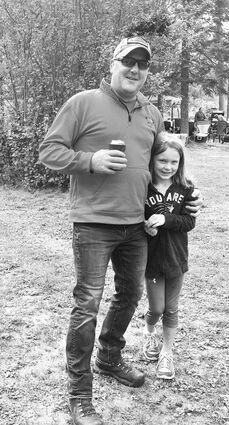 Aaron Rose and his daughter, Kynslee, in 2019

He can no longer be a normal kid.

Maybe he never was.

But he can no longer be an unknown entity.

He's famous for the wrong reasons.

He's a killer - even though that jury ruled it was self-defense.

It really is a sad time in America when a young kid becomes famous for killing his fellow Americans.

He will be praised and taunted for the rest of his life.

That is a very heavy burden.

You wouldn't want that for any of your kids.

At least, I hope not.