Lake of the Woods Outdoorsman 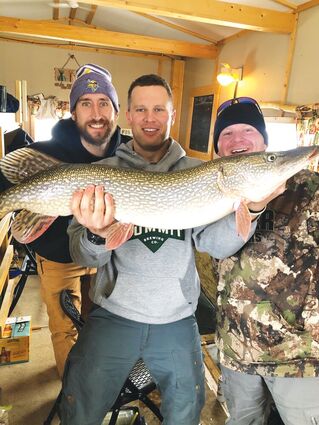 It all began when a young 19-year-old soldier from International Falls picked the name of a 16-year-old young lady from California out of a hat to be his pen pal during his deployment in Vietnam in the late sixties.

"My dad, Curtis Tessier, was the youngest of 10. He spent one semester at Moorhead State University and then decided to enlist in the Marines," explained Jean-Paul Tessier. "My grandparents were so afraid he wouldn't make it back alive, but he did, although he never talked about his time there. Dad spent his last year of military service stationed in San Diego. Visiting his pen pal, Linda Day, in Arcadia, California was number one on his agenda when he returned to the states."

After 14 months of countless letters exchanged between Curtis and Linda, it wasn't long before Curtis Tessier decided to propose marriage to Linda Day. The answer was no. Turns out Linda was not interested in marrying a military man. Curtis did not give up and continued to make the drive from San Diego to Arcadia to woo Linda Day. By the end of his military service in San Diego, Curtis had convinced Linda he was the man for her. They married on July 25, 1970 in Glendora, California.

Jean-Paul was born in 1974, followed by brother Ryan, then little sis Janelle.

"We had an awesome childhood," remembers JP. "Dad purchased Napa Auto Parts and we would ride our bikes to the store and help out with inventory. We had so much freedom riding our bikes around town back then. I wish kids had more of that freedom today. My first job was at Rainy Lake Houseboats on Rainy Lake at the age of 14 until I was 18. Working for Mr. Bill Doughtery at Rainy Lake Houseboats and for my dad at Napa Auto Parts lead me to dream of owning my own business one day."

"Every time I shot the puck at the net as a kid playing for the International Falls Broncos, I said a prayer! I wanted so badly to get just one NHL contract. That was incredibly unobtainable because I wasn't that great of a player. I was a hard worker and a good skater but not a great hockey player. When my parents asked what I wanted after my junior year of high school, they thought I would say a car. Instead, more than anything, I wanted to attend the 8 week development program at Minnesota Hockey School in Brainerd. The school was too expensive, but I got a job at the school to offset the cost. Attending hockey school made all the difference for me as a hockey player."

With much hard work and great perseverance inherited from his dad, and after several years of playing hockey for the Waterloo Blackhawks, Waterloo, Iowa, USHL Rochester Mustangs, Rochester, Minn., USHL Ferris State University Bulldogs, Big Rapids, Mich. CCHA Richmond Renegades, Richmond, Va. JP did fulfill his dream when he signed a NHL contract with the Penguins in Wilkes-Barre, Pennsylvania, the farm team for the Pittsburg Penguins.

"I didn't get to to play in the NHL, but I did sign the NHL contract I prayed for as a kid," Jean-Paul said. Jean-Paul is quick to give credit where credit is due for his achieving his hockey dream.

"I've had so many help me along the way!" stressed JP. " Myrtle Constantine, who we attended First Baptist Church within I Falls, called her son Kevin at the hockey school in Brainerd, and he got me the job at Minnesota Hockey School so I could afford to attend the development program there.  Coach Mark Kaufman, who I first played for in Rochester, would call and invite me to play hockey for him when he would move on to coach for another organization. Although I'm no longer involved in hockey, the friendships I formed during those years have endured to this day."

In February 2006, the death of Jean-Paul's dad, Curtis Tessier, after a long battle with cancer caused by agent orange, shook his world.

"By then I had been working eight years in Detroit, Mich. at Construction Materials Supply and Steel Fabrication for Ed Basile, who hired me after I graduated with a Business Degree. I had played hockey with his son, Jason, at Ferris State University. I was also attending law school on the weekends.

My brother Ryan, who lived in the Cities, my sister Janelle and I spent the last three weeks of our dad's life by his side. After Dad passed, Ryan and I went ice fishing at the Angle and that's when I decided, this was what I wanted to do! I wanted to start a fishing guide business and live in Lake of the Woods. It wasn't until three years later, Feb. 2009, that I was able to move back.  I worked for Wigwam Resort for three years before starting my own business."

Lake of the Woods Outdoorsman has now been in business since March 2012 and provides guided ice fishing, summer fishing, hunting and exploring trips, advertising and marketing consulting in beautiful Lake of the Woods. Jean-Paul and wife, Jody, also work as realtors for Reed Realty.

"Lake of the Woods Outdoorsman has four sleeper fishhouses that each hold four. I'm hoping to have them down to the lake by this weekend. Hoping! Our fishhouses are booked until Feb. We have a 22 ft. Skeeter full windshield guide boat because that is what is required on Lake of the Woods to stay safe. I provide everything needed to fish, as well as a shore lunch.

It's wonderful to be able to set my own schedule and then after guiding, hunt and fish myself! I have French voyager roots that have fueled my desire to explore. It's not easy to leave your comfort zone and overcome fears to start a business, but I have experienced more and learned more doing so. Most importantly, I haven't lost track of the people I've met along the way during my hockey and guide service journey. Dad always said to never give up on your dreams, which was great advice."