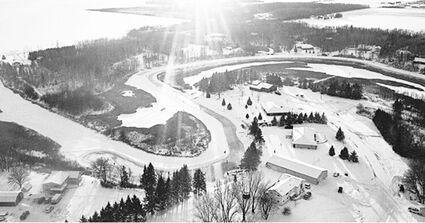 What began as a 3/4 mile skate path connecting the rinks of two neighbors on Warroad River in December 2020, has become the longest skate path in the U.S.

Known as the Riverbender Crew, volunteers Jared Olafson, brother Travis Olafson, Craig Kennedy, the Olafson and Kennedy Kids, and eleventh grader Sam Goulet, have expanded the ice skating path from last years 2.7 miles, to just over 5 miles. The record for longest ice skating path was previously held by a 4.5 mile path in Vermont.

Monday Dec. 27 was a snowing, blowing blustery morning. Jared Olafson was anxious to get out on the river to begin the all day job of clearing several inches of accumulated snow off the skate path.

"We use Polaris Rangers and Ironhide equipment," explained Jared. Ironhide has again donated a Bobcat Toolcat with an 84" broom and Polaris has donated a brush we use on a crew members Brutus. The skate path now extends along Hwy 5 where two branches of the Warroad River converge." It would be 9 p.m. Monday night before the Riverbender Crew left the Warroad River. Jared set his alarm clock for 5 a.m. Tuesday morning to finish getting the path ready for skaters by sunrise.

Christmas trees will again line Riverbend Skate Path this year courtesy of Hill's Country Greenhouse in Bemidji. A Memorial Tree Sponsorship program was established as a way to honor those we have lost, while supporting the continued maintenance of the path.

"We partnered with Lake of the Words Coffee and Scott Marvin, who designed 42 memorial plaques for 42 trees," reported Jared. "Once the skate path is cleared, memorial plaques will be placed at each tree along the path."

The trees were placed by drilling a hole in the ice with augers funded by an Operation Roundup Grant through Roseau Electric Coop.

The Riverbend Skate Path is free to the public to skate or walk, ski or snowshoe the groomed cross country ski path that runs alongside the skate path. Skates, skis, and snowshoes are available to rent at Doc's Harbor Inn and Rentals, located conveniently halfway along the skate path.

"Not only does Riverbend Skate Path and Doc's Rink attract people from the area, it has also become a destination, an addition to a bucket list," said Robin Marvin, co-owner of Doc's, with sisters Janet Marvin and Randi

Oftedahl. "We've already had skaters from North Dakota, Colorado and Texas this month. It's an exhilarating feeling to glide on a frozen river or lake!"

Riverbend Skate Path Maintenance Fund donations can be sent to: