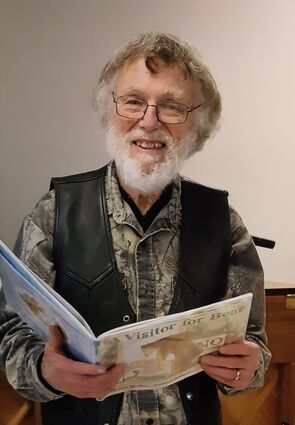 A new opportunity was presented to the Roseau Times-Region. We will be publishing a collection of manuscripted sermons weekly that were delivered by Pastor Joe Elick. He pastored the Roseau Evangelical Church for 25 years.

He would pray over each word, and carefully type each treasure on his Olympia Mastertype 3 typewriter.

We hope you enjoy this gift!

It's funny, some of the things that stick in our minds even when we've heard them only once. For example, it's been 30 years since I was a student at Bethel College in St. Paul, but there are three statements I heard at Bethel that still come back to me just as if I'd heard them yesterday.

The first one was made by a classmate of mine by the name of Kathy. Kathy was a lot of fun. Well, during the second half of our freshman year we had to take a course called "Fine Arts.." Two quarters, one on music, and one on art. On the final exam for the music part of the course one of the questions read: "Define Baroque." Well those of you who are musicians may know that Baroque is a style of music with complex rhythms dating back to the 1500's. I don't remember what definition the professor wanted, but Kathy's answer touched the heart of every college student. She wrote: "Baroque: What I am when I don't have any money!"

The second statement was made by Dr. Bob Smith in a class called "Freshman Orientation." He said, one day, "When I was a young man, still in high school, I got down on my knees by my bed one morning, and prayed: "Lord, show me something to do for you today." then I opened my eyes, and you know what I saw? An unmade bed. So I made it!"

I was stunned. It was like the speaker had hit me on the head with a brick. His statement haunted me for weeks. It still haunts me. I prayed, "Oh God, I don't want to stay the same. I don't want to be the way I am all my life. I want to go on with you and be what you want me to be."

This parable (a parable is a story of comparison) is about, a farmer, some seed, and four types of soil. We notice first of all there is just one farmer, just one kind of seed, and four kinds of soil. The soil is the variable in the story.. We want to pay particular attention to the soils. In fact Jesus begins the parable by saying to his audience "LISTEN!" Or, "Pay close attention if you want to understand this story."

The farmer goes out, probably early in the morning before it gets too hot to work, and scatters the seed in his bag: Some fall on the path (maybe several paths) because where Jesus lived there were no fences between farms, just paths where people walked from one place to another. Jesus wants us to understand that the paths were hard from being walked on (Luke 8: 5). So the seed stayed on the surface, and the birds came along and gobbled it up. Some seed fell on rocky places (verse 5): With just a little bit of dirt on the surface. Because of this it grows upward, but not downward and, as a result, when the sun is fully in the heavens, its heat withers the tiny plants and they die. Some seed falls where other stuff was growing (Like Julie's garden) (verse 7): Thistles wearing spikes and patches tied over one eye: "Grrrrr! Wheat Seeds Whatcha doin" in our patch?" Crab grass looking very crabby: "Hey! You! Pip-seed! We ain't sharin' our dirt with you! So they waited until the seeds became plants and choked them. Still other seed fell on good soil" (Rich and Ready to Receive the seed and allow it to come alive and produce a wonderful crop) (Verse 8).

When Jesus finished the parable he said: "He who has ears to hear, let him hear" (Verse 9). In other words, "If you have understood what I've said, make the application to yourself. Those who understood the parable noticed that only one of the soils produced a crop. The other three remained pretty much the way they had always been: Hard, or Shallow, or Weedy.

The meaning of the parable (Mark 4: 14-20). The farmer, it is implied, is Jesus, and also the disciples those who have received the "Seed." The seed is the Word of God, the gospel. The soil represents four varieties of people: "some people are like seed along the path..." (Verse 15) Their hearts are hard (through listening to the world; through indifference; through sin that they don't want to give up). Satan comes and takes away the word that was sown in them: (Notice how close the Devil is when the word is preached). "Others, like the seed on rocky places, hear the word and at once receive it with joy: (But there is no root). They are stirred emotionally by the Gospel, but there is no commitment. William Barclay, in his commentary on this verse says, "It is always easier to begin a thing than to finish it" (P. 95). Notice these fall away at the point they have to stand up for what they believe. "Still others, like seed sown among thorns..." On their personal priority list, Jesus is last. Their life is packed with other things. Jesus does not get the Lordship but the Leftovers from their Lives.

At school, or at work, or about the community their lives don't look any different than anybody elses so no one ever wants what they claim to have. "Others, like seed sown on good soil...produce a crop..." They let Christ take over the soil of their hearts. The life of the Word becomes the Word of their life. It changes their life and they change their world. They're not the same anymore.

Abraham Heschel, in his book, "Man's Quest for God," writes: "The Trees stand like guards of the Everlasting; the flowers like sign posts of His goodness. Only "we" have failed to be testimonies to His presence, tokens of His trust. How could we have lived in the shadow of greatness and defied it?"

Please feel free to share this reading opportunity with your friends!

Send them to our website at rtr@mncable.net for subscription information.