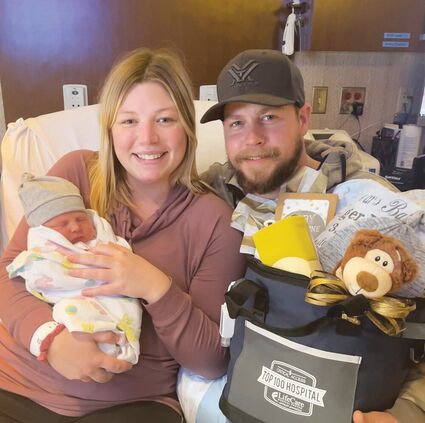 Bridger Ray with mom and dad

Her boyfriend, Jeremy Spindler, a Roseau High School graduate, was in attendance.

The first-time mother noted on Monday afternoon in Room 22 that the delivery went well and the baby was born at 10:25 a.m.

"Dr. VandeWege did the delivery," she said, adding that Jeremy is excited to be a first-time father.

"We knew it was going to be a boy," she said, adding that they really like his first name.

Molly is a school social worker.

"I go to three different schools. I go to Lancaster, Karlstad, and I go all the way to Goodridge one day a week," she said, mentioning that she works for a special education cooperative.

Was he born early?

"Yes, he's about two weeks early," she said, sounding quite perky about being the mother of the first baby born in Roseau County in 2022.

"That's why he had to come early," she chuckled, explaining that the baby was born vaginally.

Molly also laughed when it was noted that she will have to start calling the new father, "Daddy."

Jeremy's three brothers are all dads, and they will have to prep him on changing diapers, burping the baby, and other tricks of fatherhood.

For Papa Spindler, it was a long ordeal until his son's birth.

"She started having contractions on Saturday, and we came in at midnight. The days are all confused, and I haven't slept in three days. Then, they sent us home around 10 on Sunday morning."

They drove back to Hallock, he plowed snow, and didn't get a nap. So he should be ready for fatherhood and the lack of sleep.

"Then, we came back at 11:30 last night," said Mr. Spindler, who has worked as a heavy equipment operator in Hallock for the past 16 years.

He can now add "Proud Daddy" to his résumé.