Get outside and enjoy the many ski trails 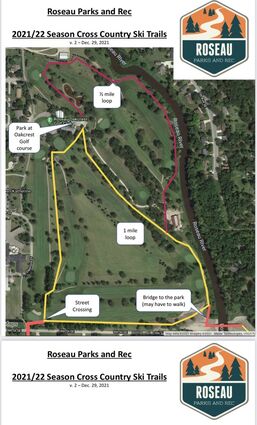 During the summer, Roseau's Oakcrest Golf Course is ruled by electric golf carts whereby golfers ride along, step out, take a few practice swings, smack the ball, and then climb back in their carts for another ride.

Once, golf was a long walk and great exercise. Now, many who could use the exercise are no longer legging it down the fairways.

Which is why winter offers great exercise along those same 18 holes, not to golf but to cross country ski.

He has definitely expanded the local horizons as far as cross-country skiing.

"We've got trails on the golf course, some new ones in the city park, and more over by the softball fields," he said, adding that he uses his snowmobile and pulls a sled that has the markings for skis and it's hooked up behind the snowmobile.

He plans to groom as often as he can.

Currently, there are over five miles of groomed trails.

"If all goes well, I'm hoping to greatly expand that to at least 10 miles or more," he said, mentioning that he is planning to groom Mt. Roseau, the big hill east of the Roseau City Park.

"Right now, no. Last year, there were a couple of volunteers, and I am looking for volunteers. Currently, I don't have anyone signed up to help."

A volunteer's snowmobile should have a hitch and the capacity to pull 50 to 75 pounds at low speeds. 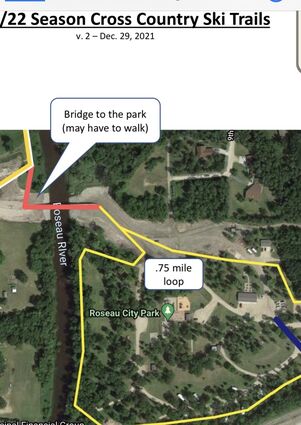 "Last year, we learned a lot, and one of the challenges was snowmobiles driving on the trails. This year, we are working to avoid areas where snowmobiles travel. The ski trail can be easily mistaken for snowmobile tracks."

Severson noted that Roseau is a snowmobile community and that they want to ensure both sledding and skiing enthusiasts can enjoy their respective spaces.

"The ski groomer is simply a pull behind metal sled that carves two deep ski grooves into the snow. It's pretty easy and just takes time at 10 to 15 miles per hour."

Are you a skier?

"No, I'm a sledder," he said, adding that with the recent Arctic cold snap, he hasn't spotted many ski enthusiasts enjoying the outdoors.