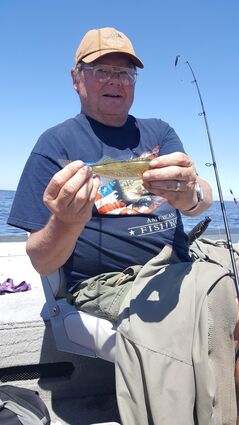 Terry Ross Hanson was born in Alexandria, on January 5, 1951 to parents Louis and Rosemarie (Anderson) Hanson. He grew up in Hoffman on a farm. He graduated from high school in 1969, and then attended Bemidji State University, graduating in December 1973 with a Bachelor of Science degree in Criminal Justice.

It was in Bemidji that he met his wife, Susan Anderson. They were married on June 22, 1974. They first lived in LeCenter and Montgomery. Terry was a county corrections officer for Le Sueur County. In 1977 they moved to Roseau and had lived there until the time of his death. He was a corrections officer serving Roseau, Lake of the Woods, and Kittson Counties. In 2003 he was awarded the Department of Corrections Agent of the Year for the State of Minnesota. He retired in 2011.

Terry enjoyed bowling, fishing, hunting, golfing, and, of course, his motorcycle. He was very active in the Roseau Jaycees for many years. Also, he served on the Roseau City Council for 12 years. He enjoyed life, family and friends.

He was preceded in death by his parents; parents-in-law; sister-in-law Sandy Yeager; and niece Jessica Hanson.

A Visitation for Terry was held Thursday January 6th from 5-7 p.m. at Helgeson Funeral Home in Roseau. A Funeral Service was held at Messiah Lutheran Church in Roseau at 11:00 a.m. with a visitation a hour prior on January 7th. Interment will be at Hope Cemetery.