Jeff Bennett's Benefit is a very worthy cause 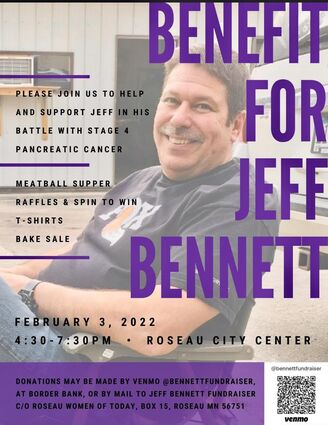 On Monday morning, Patty Bennett bubbled over talking about her husband, Jeff Bennett.

Unfortunately, time is not on their side.

Her husband originally was an engineer with Ford Motor Company until he moved here to work for Polaris in 1992.

"We didn't get married until '98. I met him at Polaris when I started there," said the former Patty Petrowski of Falun.

They never forget each other's birthday.

Only now, unless there's a miracle, they will never again celebrate their birthdays together.

"I still work at Polaris, and Jeff retired three years ago. Everything was going well, and then he was having a lot of indigestion and just didn't feel well."

It was the first weekend of the deer rifle season, and he was really sick. Finally, their son Zak, who is an LPN and studying to be an RN, talked his dad into going to the ER the third weekend of deer season on November 20.

Patty drove him to LifeCare Medical Center where he saw Dr. Brillo.

"He asked Jeff some questions and basically said, 'Well, we'll find out in a half hour to 45 minutes what's wrong with you.' They did a CT scan, and he came back and told us that he had some bad news and the prognosis wasn't good."

Jeff had two tumors in his pancreas, and the cancer had spread to his liver.

"It was Stage 4 and was incurable and inoperable. He could try chemo. They told him it will maybe extend his life for two months or so."

"He decided not to do chemo because he wants quality of life instead of quantity. He wants to do as much as he can with us and enjoy us instead of being sick from the chemo because it's some of the strongest chemo drugs they give."

She described pancreatic cancer as a silent killer.

"When they usually find it, it's already Stage 3 or 4 because your pancreas is hidden behind your stomach, and they can't feel it and it's like indigestion."

Patty laughed when asked what she knew about her husband as a kid.

"Jeff was a motorhead! He loved dirt bikes and just anything that had a motor."

When he was a kid, she said, he tore apart his toys and studied them before putting them back together.

"He just has a mind that is always thinking outside the box, and what he can do to make it better," she said, recalling her mother-in-law's recollections.

Jeff is a graduate of Lawrence Technological University in Michigan.

"He can fix anything," she said, adding that he's very creative.

"His mind is going, even now. He's sleeping right now because he's had a couple of rough days."

His main project is working on wheelchairs out in his garage.

"He's trying to figure out how wheelchairs can be improved for people who are in them. That's been his project since he retired. He's just doing it on his own."

Jeff heads out to the garage every day for a little while.

"But he gets very tired. He's very talented and has lots of patents with Polaris."

He's also a tall man, around six-two, and tipped the scales at 225. He's lost about 40 pounds since his diagnosis.

For the record, they didn't go to a dirt bike race.

"We went to Jamaica," she laughed, adding that their kids went to a lot of dirt bike races.

"The kids raced snowmobiles and dirt bikes when they were little."

She has great memories but cannot escape reality.

"Without chemo, his prognosis is four to six months. When we found that out in the ER that day, I just looked at Jeff and said, 'I'm so happy you retired three years ago. You got to live your dream and do what you wanted to do for three years.'

"And he looked at me and said, 'Patty, I am not scared to die, but I'm scared to leave you guys. But I know where I'm going. I get to go see my mom and dad.' Jeff was adopted."

His mom passed away a year ago yesterday. Jeff's adoptive parents were Clyde and Martha Bennett.

"He really loved them, and he loves my parents, too."

Robert Przekwas, retired since 2016, worked for Polaris for almost half a century.

"I've met a variety of talented people, some being characters as well. Jeff is one of them."

Mr. Przekwas remarked that he would occasionally call Jeff governor or senator because he could talk like a politician.

"Jeff is a good man, a loving husband and a proud father. I feel so helpless with this situation. Jeff is realistic about his cancer, matter of fact as always. Truthfully, I love the guy."

"My family has been very supportive through all this. St. Phillips, everyone, all these people have," Patty said, crediting Christine Sibilleau and the Women of Today.

The benefit is Thursday, February 3, at the Roseau City Center.

"They're going all out. My kids decided to take the semester off to be with their dad."

She remarked that God has a plan for all of us.

She wanted to thank everyone for their love and support and prayers.

She has love in her voice.

"Some days, we are sad. We tell ourselves we can only have a pity party for 15 minutes a day. You gotta think positive and move on."

If Jeff is doing okay on Thursday, February 3, he will be there for an hour or so.

You should be there, too.

It will mean the world to Jeff and Patty, Zak and Haylee.