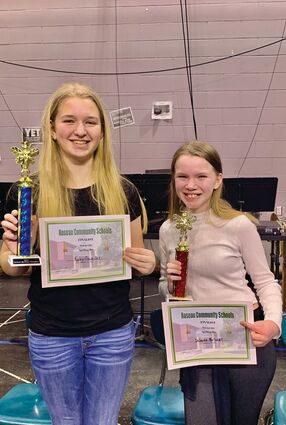 What is required to be a good speller?

A week ago Monday, January 24, the 16 best spellers in grades five through eight gathered in the Roseau School Theater at 7 p.m. for an old-fashioned spelldown, annually known as the Scripps National Spelling Bee competition.

It starts at the local level, and these are the 16 Roseau School contestants:

Ms. Ann Olson was one of the three judges along with Mrs. Carla Olsen and Ms. Chelsy Filbert.

"She's the returning champion, which doesn't happen very often," she said, mentioning that the runner-up was Delayna Mortvedt.

"She's in grade five and is amazing. She was so determined," she said, while impressed with the other 14 spellers, who tripped up on a vowel or a consonant to bow out.

"When it's down to the final two and one of them makes a mistake, the next person has to spell that word correctly and then spell the next word correctly," said Ms. Olson.

Otherwise, it's back to square one with the two finalists.

"The two words Ruby spelled correctly were emboldened and then contessa," she said, adding that Verna McVay served as the pronouncer.

Olson noted that it was a good competition, and there are always a few little glitches where it's hard to hear what the kids are saying.

"You do the best you can," she said, adding that the two students who won were very deserving.

"We didn't have our usual podium set-up. Those are small things, but we got it done," said Ms. Olson, who added that all the contestants deserve the recognition.

A year ago, Miss Osweiler reached the regional finals, quite an accomplishment.