Starting a new tradition in the new Roseau Gymnasium 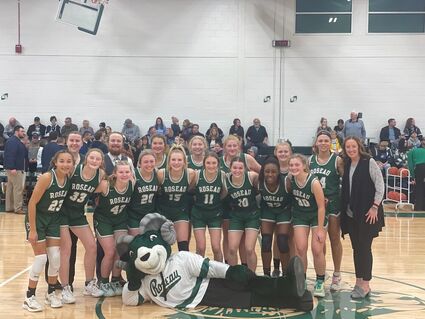 Roseau School Superintendent Tom Jerome sat in the bleachers in the new gymnasium a week ago Friday.

Approximately seven hours later, the school would host the first basketball games ever in the new gymnasium.

Tom Jerome would be there as would several school board members and school administrators.

Mr. Jerome had nothing but praise for the student body and staff who have made many sacrifices.

With the on-going construction, students have had to walk a full city block to go from the West Wing to the east side to access another entrance.

And vice-versa if they had classes in the West Wing.

"The kids have been super great. Honestly, there hasn't been a complaint from a kid all year. They're so excited about all the new projects here," he said, explaining that they have added two minutes to the passing time and they now have seven minutes to get to their next classes.

The weather hasn't always been ideal this school year, but the students have been great making the march up and down the sidewalk in rain and now the snow and strong winds, according to Superintendent Jerome.

"It's an incredibly small price to pay during this time period. In fact, I would say our physical education teachers have made a much bigger adjustment," he said, explaining that they went the first half of the school year without their traditional classrooms.

"The students and staff walking outside has been inconvenient, but it's been a very small adjustment for all the amazing work that's coming. It's been a non-issue."

He noted that he is super proud of everybody for their efforts.

"Inside of this building, there is nothing but positive energy and excitement about this project, and the kids have been great as has been the staff."

On Saturday, Tim Fugleberg, a member of the Roseau School Board, had high praise for the new gym.

"I was at the grand opening last night," he said, adding that he's been in the gymnasium throughout the construction.

"We took out the stage, the balcony, and the locker rooms that were underneath the balcony. So, it's one giant gym floor."

He noted that the foot print is the same as the old gymnasium, but the size is double the gym floor space.

"Where the band and choir rooms used to be is where the locker rooms are now," said Mr. Fugleberg.

He was asked if the school lost a little history with the demolition of the old gym.

"It's not the same as it was. I guess any time you do something different, you give up the old to get the new," he said, adding that the previous gym had been built in the 1960s.

Most importantly, he said, is that the new gymnasium was built inside the confines of the old gym, and they saved a ton of money by retaining the steel rafters and the walls.

"I thought last night was really a cool night for Roseau basketball, for the school, and for the community," she said, impressed with the very large turnout.

"It was fun for our kids to play in front of a full house. It's a good start to a new tradition. It's not the old gym," she said, adding that there are still aspects of the old gym.

"Technically, it is the old gym because it's in the same space but completely revitalized. It feels very different for a game but, for practice, it's awesome to have the extra space."

When it was mentioned that it never hurts to win, Coach Didrikson was in total agreement.

"Our JV won on a shot at the buzzer. I don't remember the final score, but I know Sophie Olson hit the shot."

It's been a good year for the Lady Rams.

"We're 14 and 3. We're having a really fun year and have a group of girls who play really unselfish basketball and are really a fun group to coach," she said.

For the record books, the varsity Lady Rams won the first ever varsity basketball game in the new gymnasium.

"It was a packed house and just fun to see. A gymnasium is supposed to be loud, and it was loud. It really almost had a playoff atmosphere because the crowd was so big," he said, noting that the Lady Rams dominated from start to finish.

"It was really neat to see," said Mr. Lingen, who then commented on the boys game.

"I thought our boys competed hard, and it was back and forth early on, but then they fell behind," he said, mentioning that, in the second half, the boys made a little run but just came up short at the end.

"It was just a special night," he said, adding that he wished the boys would have won.

"It was a fun night for the grand opening. The juniors held their fundraiser and sold barbecues and ham and cheese. They sold out, which is fantastic."

Last Friday night, Mr. Lingen, a former coach for the Thief River Falls Prowlers, mingled with the Northern Freeze fans after the game.

"A lot of their fans were just raving about how neat the gymnasium is. It was nice to hear that, too," said Mr. Lingen, who labeled the evening "a success!"

Last Saturday morning, Terry Gotziaman, the former long-time RHS principal and athletic director, was contacted in Fort Myers, Florida, where he spends the winter in the sunshine and warm weather.

He definitely wasn't wearing a tank top or his cutoff shorts. He was bundled up against temperatures in the low 40s.

Mr. Gotziaman had just received a text with a photo of the new gymnasium.

The usually loquacious Greek had just one comment, which said it all.