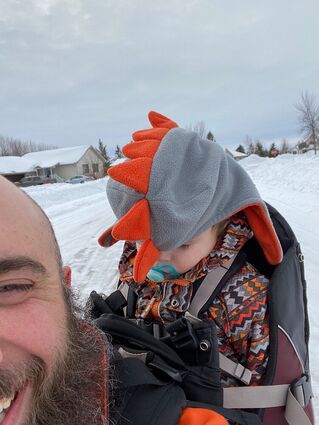 Derek Zimney was determined to take part in this year's Goggins Challenge with his friend Jamie Omdahl, who along with wife, Jessica, is in the process of opening Riverview Outdoors And Recreation (ROAR) in Roseau. Last year Derek had other commitments, but this year he was ready to take part in the challenge.

Jon Hellerup was busy working at South 89 Farm and heard Danielle Byfuglien on the radio encouraging Roseau County residents to take part in the Goggins Challenge. Jon sent his wife, Ashley, a quick text asking what she thought about him taking part in the challenge. His answer from Ashley was a smiling face. When Jamie and Derek set out on the first four mile lap around Roseau, on Friday, March 4, Jon was a member of the trio to complete the 4x4x48 Goggins Challenge; four miles, every four hours for 48 hours.

"Last year I did the challenge by myself, so this year it was great to have Derek and Jon also taking part in the challenge," said Jamie. "Jed Dunham and son, Levi, did a couple four mile laps with us down Main Avenue, through the City Park and Oakcrest Development and back to Riverview Outdoors And Recreation. During one lap we had six people join in and walk with us at 2 a.m."

The Goggins Challenge, a new fitness challenge, was started by David Goggins, a famous American ultramarathon runner, ultra-distance cyclist, triathlete, motivational speaker and author. The challenge can be done anywhere in the world but takes place on a specific date, this year on Friday, March 4, 10 p.m. through Sunday March, at 6 p.m.

Jamie Omdahl, a full-time EMT with LifeCare, has a passion for the outdoors, from winter camping trips, hiking and canoe trips to the Boundary Waters, competing in the Minnesota State Mountain Bike Series, as well as ultramarathons and trail runs from 13 miles to 100 plus miles.

"Endurance events have a way of teaching you things you never thought possible," explains Jamie. "I'd love to pass this on to our community by getting more people physically active in the outdoors by hosting fun and exciting events year-round that cater to all ages and fitness levels. People can do more than they think they can!"

Derek Zimney, an engineer at Polaris, is a big believer in doing rather than watching others take part in events.

"The weather was beautiful during the challenge," recalls Derek. "It wasn't twenty below and there weren't any mosquitoes! During two of the four mile laps with Jamie and Jon, I carried my one year old son, Daxton, in a backpack. It didn't take him long to fall sound asleep!"

"It was my oldest daughter, Hadley's ninth birthday on Saturday and my cousin's daughter also turned one. We did some sledding at Malung Mountain after church."

Derek and wife, Tessa, have two other children as well, Zander, 6, and Kenadi, 5.

"At one point we walked by the Veterans Memorial all lit up with the American flag waving. The snow was coming down in big flakes, and we reflected on how well we have it in our country compared to other places in the world," said Derek. "Jamie and I got to know Jon during our laps through Roseau. He's originally from Denmark and working towards citizenship."

Jon Hellerup came over to the U.S. on a K-1 student visa seven years ago to study Agriculture at Magnusson Farms.

"I grew up on a farm in Denmark and was surrounded by farms," explains Jon. "I enjoy farming and volunteering for the Roseau Fire Department. There's great satisfaction helping others. Other than my wife, Ashley, and our two daughters, those are my greatest loves. I work with Ashley's brother and sister-in-law at South 89 Farm.

At one point in the challenge my knee was really hurting and Derek had blisters on his feet but Jamie kept us motivated. He explained how to make my knee feel better by doing stretching exercises. We discussed the world's troubles but then we told so many jokes to lighten things up and keep us going. It was snowing and blowing, but we walked shoulder to shoulder and completed the challenge on Sunday at 7:20 p.m."

Jamie and Jessica Omdahl will be opening Riverview Outdoors And Recreation full time this May after spending several weeks remodeling their building. Find Riverview Outdoor And Recreation on Facebook as well as their website http://www.riverviewoutdoors where they will specialize in sales and rentals of snowshoes, paddle boards, kayaks and bikes of all types as well as accessories. Jamie may be reached at ROAR, 218-452-3972.