Polaris knows how to celebrate its version of Spirit Week 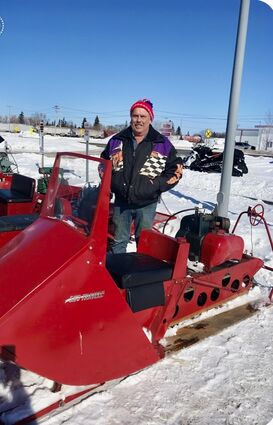 Mitch Magnusson with his K 95 snowmobile

Love has nothing to do with beauty.

In the Polaris parking lot adjacent to Highway 89 in Roseau, it was akin to looking at the earliest flying machines, like the Wright brothers' Wright Flyer.

Only these were relatively ancient snowmobiles, some that were impressive only because their designs are mostly long forgotten.

The earliest ones look like they might belong in the annual Soap Box Derby if they had wheels.

But not to the connoisseurs.

Larry Hosaluk, 62, worked for Polaris for 26 years before retiring about four years ago.

Long ago, he lost his Canadian accent and laughed when asked if he was still a Canadian.

He pointed down the line of old Polaris snowmobiles that were lined up north to south starting with the oldest.

Mr. Hosaluk was a Power Train design engineer for the Big P. He came out of the University of Manitoba in Winnipeg and found a career in Roseau.

His uncle up in Winnipeg had a Polaris dealership in 1965-66.

"When I was a little kid, that's what I rode on in the backseat. Then my uncle got an Arctic Cat dealership from '66 to '84, and I rode those all the way up into my teen years."

"So, I lead the R & D Team, and we're having a blast," he said, noting that they just introduced Model Year 2023 sleds on Monday.

"There's a press release that just went out. We have a lot of new products, and we're getting back into the four-stroke category," he said, explaining that most of the snowmobiles have two-stroke type of engines.

"They have a lot of power and are fun, but the four-strokes are intended for people who just want to get out and have fun and are not necessarily race enthusiasts."

Presently, Mr. Dieter owns three Polaris snowmobiles. Two of them were on display, an EVO for little kids and an old 1988 Star.

"My first experience was on a Star with Mitchell Johnson and his son, David, back in about 1986."

He noted that for this event, they tried to get a snowmobile for each year from the 1950s to 2023.

"This week is Profit Sharing Week. We are celebrating our results from last year. So, we're doing some fun things," said Mr. Dieter a week ago Wednesday, adding that the day before they had gone on a vintage ride and tomorrow they would have some races on the back track for the employees.

He scanned the front parking lot with the restored Polaris antiques to the newest models."This is something we thought would be fun not only for employees but for the people in the community to just come and see the evolution of Polaris snowmobiles."

He commented that Polaris has plants all over the world, but this is the only one that makes snowmobiles.

"We make ATVs and snowmobiles here," he said, glancing around and greeting retired employees and old friends.

"We celebrate the whole week, kind of like a spirit week they do at the school. On Friday is the grand celebration when they hand out the checks."

Karrie Rugland, the daughter of Mike Hetteen, the son of the late Allan Hetteen, one of the original founders of Polaris, was home for the special occasion.

"I'm working for Polaris down in Wyoming, and I live in the Twin Cities," she said, adding that she came up to experience Profit Sharing Week and all the cool stuff.

She was accompanied by a young lady, Danielle Duzan, who works in human resources at the Wyoming, Minnesota, plant.

"I worked for Polaris for 36 years and retired in 2016," he said, adding that he worked in purchasing, sales, marketing, and engineering.

Have a favorite sled?

Some people just stand out in a crowd.

It was hard to overlook Caroline Allard, a statuesque six-footer, from the rural municipality of Headingley, Manitoba.

The Canadian graduated from the University of Manitoba with a degree in mechanical engineering in 2014.

"I worked in Winnipeg for an aerospace company for a year and then came to Polaris in 2015. I'm having a blast," she said, mentioning that she loves Roseau.

Ms. Allard is working on the new four-stroke engines and had been working on off-road vehicle engines.

"Working at Polaris is a dream job for me because this is all the stuff I love to do in my spare time. So, getting to do it for a career is just so rewarding."

She is an avid snowmobiler and had her favorite sled on display.

Randy Burrell, a Polaris employee, was spotted down by the older models. He's no kid himself with 26 plus years at the plant.

"I work in the Fab Shop in engineering. We probably build the first ones of everything - the parts and all the components that go in them."

The oldest relic he owns is a 1964 model. It's a Mustang and it runs. He will walk off the job for good on April Fool's Day.

Mitch Magnusson had five old Polaris sleds on display and was asked which was his favorite one.

"Of all of them? I think I got about 40 total," he said, and was asked if they were all operable.

"That's the problem. The gas these days gets bad so quickly that I've had to tear the carburetors apart."

Mitch stashes them anywhere, maybe even in his kitchen.

"A lot of them are in the semi-trailers on my property," he said, explaining that he had never worked for Polaris.

"I applied here and Marvins at the same time, and Marvins called me before Polaris," he said, laughing when asked if he still works there.

Mitch, 67, was asked to pick the best sled he's ever ridden.

His other favorite sled is the 1972 Starfire.

"I always loved them as a kid. We drove them hard and then sold them and got another one the next year and, 20 years later, I was wishing I still had one. I do own one now."

"Snowmobile collecting is a disease for which there is no cure," he said, before mentioning his girlfriend, Monica Dohmen.

"Five years ago, she said she wanted no part of collecting snowmobiles. She's adapted well to the disease because she now owns nine."