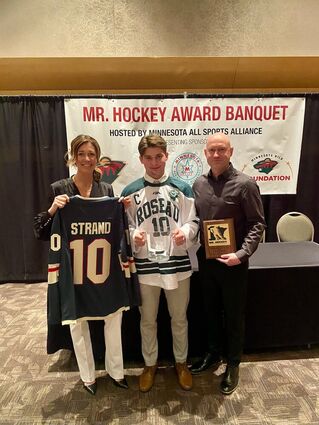 Jennifer and Joe Strand with their son Max

On Sunday afternoon at the St. Paul RiverCentre, Roseau senior Max Strand was announced as the 2022 Minnesota Mr. Hockey Award winner, joining Aaron Ness, the 2008 recipient, as the only other Ram to earn the distinguished award.

Max might have been the most surprised guy among the ten candidates and not because he hasn't had an exceptional high school career.

It's just not in his nature to believe he's the best or the most deserving.

Later on Sunday, he laughed when asked if hockey was his favorite sport.

Get this, he might be the only award winner since the Minnesota Mr. Hockey Award began in 1985 who looked like he'd been in a knife fight.

There were seven prominent black stitches on the right side of his chin.

Blame it on a blazing slapshot the night before when he was playing for the St. Cloud Norsemen.

His dad, Joe, reported that his son had scored a goal and an assist in the 5-2 victory over the Minot Minotaurous and was injured with about nine minutes remaining in the game.

"It took seven stitches, and he spent three hours in the ER after the game," said Mr. Strand, adding that his son got to bed at 2 a.m.

The kid is a gamer.

When his name was announced as the 2022 Mr. Hockey Award winner, he walked up to the podium and first congratulated his fellow finalists before thanking his family, teammates, coaches, and the Roseau community.

"He just comes to the rink with a 100 percent work ethic every day. He can score, he can set people up, he's kind of the whole package and is good in the defensive zone. I like his attitude and the energy that he brings to every game. He has a good motor," he said on Sunday evening.

"We were all a little surprised because this Alex Bump of Prior Lake was kind of the front runner. All ten of those kids were good candidates. Daimon Gardner from Warroad was also up for it. Any of the ten could have gotten it."

Still, it was the highlight of the year for the Rams, who had suffered a tough semifinal loss in the playoffs.

"Obviously, we were delighted that Max got it. I think Max is probably the top two-way player in the state," he said, mentioning that Max had a great season.

"In 27 games, he had 36 goals and 42 assists for 78 points. That's a heck of a year for a kid," he said, adding that Roseau's own Paul Broten, a retired NHL player, was the keynote speaker and announced the awards.

"When Paul got up there, Tom Murphy kind of poked me and said, 'I think Max is going to win it.' So, it was neat when Paul announced Max, and Paul did such a great job."

The kid is the full package.

"Max killed penalties for us. His plus/minus ratio was over 40 this year. He had a great season and a lot of ice time. He's a great kid, a humble kid, and kind of quiet. He was a heck of a leader for us."

Max, the son of Joe and Jennifer Strand, was reached on Sunday evening at his new residence.

"I'm in St. Cloud playing hockey with the St. Cloud Norsemen in the NAHL," he said.

It will forever be noted in his résumé that he is the 2022 Minnesota Mr. Hockey Award winner.

"Never expected to win it. That's for sure."

He was asked for the highlights in his career with the Rams.

"Definitely, it was beating Warroad my sophomore year and coming back from something like a 4-1 deficit and beating them 5 to 4."

And this year, after getting shut out in Roseau Memorial Arena, the Rams defeated the Warriors in the Warroad Gardens.

"It's nice to get some revenge on them," he chuckled.

Here's what he wanted to say about his coaching staff.

"They were great. They were first-year coaches, and we couldn't have asked for anything better. They were awesome. I absolutely loved it this year."

To date, Max has scored three goals and tallied three assists for the Norsemen. Next year, he hopes to play in the USHL.

Dan Urness, the RHS guidance counselor, was reached on his way back to Roseau on Sunday afternoon.

"Everybody thought this Alex Bump was going to get it. This is just awesome for Max, who's a great kid," he said.

What stands out about Max, he said, is his work ethic, his humility and that he consistently goes about his day-to-day business.

"He absolutely loves to play hockey," said Urness, whose son, Noah, a sophomore, was an integral member of the team.

"Max has been a very good role model for the younger kids, leads by example, and does a great job with all that stuff."

Urness further noted that Max is an "A" student and checks all the boxes and is a very good teammate."

Mr. Hockey is chosen by a panel of NHL scouts, junior scouts and coaches, and select media members from around the state.