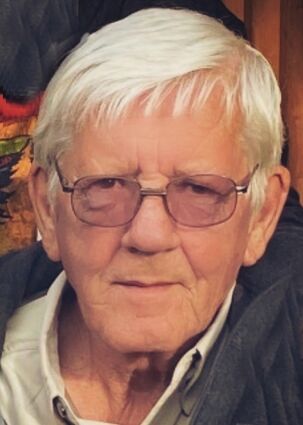 Badger- Curtis "Curt" Hauger passed away in the early morning hours of March 8, 2022.  Curt was the second son of four siblings born to Camilla and Lloyd Hauger of Badger.  Curt married his high school sweetheart and love of his life, Diann Harms, in August 1966, both at the age of 19.  Curt and Diann had four daughters, Michelle (1967-), Carrie (1970-1970), Renae (1972-), and Alison (1978-).  Shortly after marriage, Curt was stationed in Massachusetts at Westover Air Force Base and completed several temporary duty assignments in Guam as an Air Force aircraft mechanic.  In 1970, Curt was honorably discharged at the rank of Staff Sergeant.

After returning home, Curt began his career in law enforcement acting as a Sheriff's Deputy for Roseau County.  Curt served as a Sheriff's deputy from 1971 to 1982, when he was appointed to the office of Chief of Police for the City of Roseau.  Curt occupied the office of Chief of Police from 1982 to 1995.  In 1995, Curt was elected Roseau County Sheriff, a position he proudly served in until 2001 when he joined the United Nations International Police as an instructor. The United Nations took Curt across the world, training police officers in Kosovo and Jordan.  After returning from Kosovo, Curt's big heart showed through as he assisted the Jasiqi family of Kosovo in obtaining U.S. citizenship and settling in Badger.  Since Curt's time in Kosovo, the Jasiqi family have become beloved members of the Hauger family.

Upon returning from his final mission with the United Nations in Jordan, Curt opened Ridge Sales, an office specializing in the sale of tractors and machinery consignments, as well as the drinking of coffee and talking smart. After running Ridge Sales for a number of years, Curt once again found himself in an election race for Sheriff of Roseau County.  Curt ultimately dropped out of the race and later accepted a position as Roseau County Undersheriff.

Curt was a beloved son, brother, husband, father, and grandfather.  He was a leader in his community and was known as a fair and generous man.  He was the patriarch of his family, offering invaluable wisdom and guidance to his three daughters and six grandchildren.  His innumerable friends and family will miss his sharp wit, his blunt advice, his bottomless generosity, and the giant heart he just couldn't quite hide under his tough exterior.  While his temporary sojourn on this plane has come to an end, we know Curt is now with Our Savior, and that he will be with each and every one of his loved ones through the trials and tribulations of this life until we at last meet again.

A public service for Curt was held on March 13th at the Badger High School Gymnasium with visitation from 12:00–2:00 p.m. and the service beginning at 2:00 p.m.  In lieu of flowers, the family asks that memorial gifts be sent to 27462 260th Ave, Badger, MN 56714.  Memorial gifts will serve as the initial endowment to the Curt Hauger Memorial Law Enforcement Scholarship.