Flagpoles are making too much noise near the Gazebo 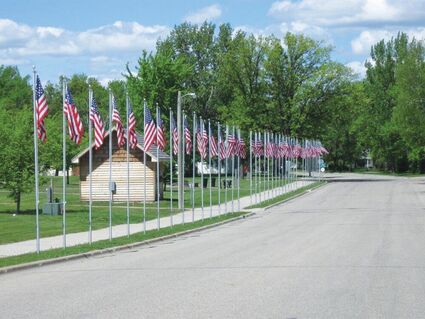 Last week, Roseau City Planner Todd Peterson was contacted regarding the flagpoles along the Veterans Memorial Park making noises in the wind during the summer concerts.

"I've never personally received a complaint, so I'm only speaking to this second-hand. The Park Board and the Gazebo Concert Committee have heard complaints from concert-goers that the poles are dinging or banging whenever there's wind. So, it's kind of a distraction," he said.

Mr. Peterson next commented on the number of flagpoles along the entire avenue.

"The Park Board had some concerns because they weren't really aware that there were going to be so many and that they were to go over as far as the Gazebo," he said, recalling that the Roseau City Council had originally approved the placement of the flagpoles along the avenue.

"So, there have been more and more added, and so they are getting over by the Gazebo and having an impact on what is occurring there."

He mentioned that the Park Board has had some discussions with Val Bernat, the gentleman in charge of the Veterans Memorial.

"Do the poles need to stay up when the flags aren't flying?" he said, adding that he understands that it's time-consuming to remove the flagpoles.

"The Park Board is saying the poles aren't attractive when they don't have flags flying."

Those are some of his concerns in addition to the noise factor from the flagpoles.

"If the flags are coming down, we'd like to see the poles come down for a certain period of time. That's what the Park Board is saying. There's getting to be so many that it's hard to see the park. If you're going to have the poles up, there should be flags flying."

According to Peterson, the Park Board was never asked about extending the flagpoles beyond the Veterans Memorial to near the Gazebo.

"Their feeling is, they weren't asked if they had an issue with all these flagpoles being in front of the Gazebo. I think that is where some of this has come from."

He emphasized that nobody is opposed to the idea of the flags. It's just that the Park Board wasn't included in the discussion.

"The banging of the poles could have been brought up at that time. How many flags are they ultimately going to sell? Is there going to be a thousand flags? It seems like every year Val is adding more and figuring out where to put more. There should have been a plan."

Peterson concluded that the only complaint he's heard is the banging of the poles during the concerts.

Keith Severson, the director of the Park Board, never commented on the number of flagpoles.

"The feedback that we get, especially during windy nights, are the clanking against the poles. So, while the music is playing, all you will hear is the clanking in the background. If there wasn't any rope making the noise, it probably would be fine," he said, adding that if there was some way to secure the ropes tightly, there'd be no problem.

Has anyone complained that the music is too loud in the neighborhood?

"The sound quality has never really been an issue," he said.

When reached for a comment about the flagpoles making noise, Mayor Dan Fabian chuckled and said, tongue in cheek, "Oh, my Lord! It's great to be the mayor of Roseau and dealing with some sort of noise that's rattling on the flagpole and not mayhem and destruction, murder and violence, and whatever else."

If concert-goers are having a problem with hearing the music, according to Mayor Fabian, they should move closer to the speakers.

But the actual problem appears to be a plethora of flagpoles situated along the boulevard.

Nor will the aging Vietnam War era veterans, now mostly in their seventies.

"I'd heard that part of the complaint about the noise but never heard it first hand. Nobody said anything to me."

He wanted to thank the contributors who have donated over $100 each for a pole. He noted that the flagpoles are meaningful to the public.

"They look at them and they look at the names of those who are being honored, and they understand the history of what those names stand for. It's brought us to where we're at now. The donors are doing their part to make sure we don't forget."

He singled out Carol Holland, whom he described as part of the old crowd that does her part for the veterans.

Last fall, Mr. Bernat spent four hours taking down all the flagpoles and then storing them in the bingo building at the fairgrounds.

"This May, all the poles will go back up for Memorial Day," he said.

"They were tied tightly to the base of each pole," he said, explaining that they will be moving the 56 flagpoles from the boulevard and be stationed permanently in place with the flags flying proudly year-around.

Each American flag costs $25, and Mr. Bernat noted that they usually have to replace each flag two to three times a year.

By this summer, a meaningful symbol will no longer grace the entire boulevard.

"They will be on our property," said the old combat soldier.