A Remarkable Tribute To Two Long Ago Law Enforcement Heroes 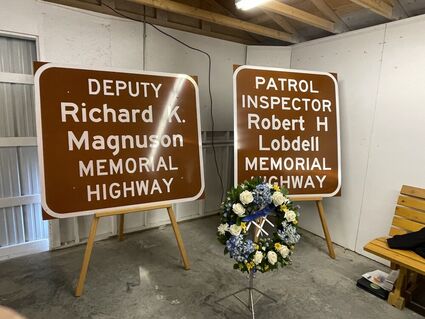 The highway memorial signs with the wreath

With the temperature at 39 degrees at 2 p.m., the Billberg Building was assuredly the best protected gathering in Roseau County in recent memory as approximately 20 various law enforcement agents, all of them armed, stood at attention as two of their own were being honored.

The guests of honor were family members of the late Richard Magnuson, a Roseau County Deputy Sheriff.

While Border Patrol Inspector Robert Lobdell was killed in action 93 years ago and has no living family members, he was well-represented by current members of the U.S. Border Patrol.

Pastor Todd Erickson began his invocation by requesting a moment of silence for Roseau County resident, Cody Olafson, 26, who was in training as a U.S Customs and Border Protection Officer in Georgia.

In his invocation, Pastor Todd singled out the role of law enforcement in protecting and serving.

"Thank you, Lord, for their service. We simply pray that this memorial today will honor Deputy Richard K. Magnuson and Patrol Inspector Robert H. Lobdell, their memories, and will serve as a constant reminder of those who have paid the ultimate sacrifice."

That message was also the focus of Roseau County Commissioner Jack Swanson.

"We're here today to honor two who got up, went to work, and never came home again. Most of us, we go to work, we come home, and that's our lives," he said, adding that in certain professions they daily put their lives on the line for us.

"For that, we thank them. One of those folks is our Roseau County Sheriff Steve Gust."

Mr. Gust began by thanking everyone in attendance and singled out retired Border Patrol Agent Robert Tuttle for spearheading the dedication.

"This day is for remembering our fallen family members, co-workers and friends, and keeping them in our thoughts and prayers. It is also a reminder of how fragile life really is, and that we are not immune from big city problems."

Sheriff Gust remarked that barely a day goes by that he doesn't think about Officer Magnuson and what he has heard from his fellow officers who were working on that fateful day in 1978.

"They never forget, and let us not forget. May God bless you and the men and women who have given their lives in service to our nation."

Sitting several rows back was Julie Sprague listening attentively. The Crookston native is forever a member of the Magnuson family as Rick was to be her future husband.

After the program, she recalled a lifetime ago when she was young, in love, and then he lost his life in a hail of bullets.

Shortly, Mike Johnson, the Patrol Agent in Charge of the Warroad Border Patrol, marched up to the podium.

His mission was remembering Robert Lobdell, how he died from a gunshot to the temple on Christmas Day 1928, and the capture a day later of his killer, George Ryan, as he was attempting to flee into Canada.

"Patrol Inspector Lobdell made the ultimate sacrifice for our community and our country. He gave his life in the performance of his duties, leaving behind his wife, Estella Lobdell, his parents, and his brother," said Mr. Johnson, noting that on April 11, 1929, George Ryan was sentenced to life imprisonment at Stillwater State Penitentiary.

Almost a century later, Inspector Lobdell has not been forgotten, according to Mr. Johnson.

"In 2004, the Robert H. Lobdell Memorial was dedicated in Warroad in front of the United States Border Patrol Station," he said, noting that in 2008, Mr. Lobdell was duly honored at the Roseau County Emergency Responders Memorial.

"These highway dedications are yet another opportunity to memorialize the sacrifice Patrol Inspector Lobdell and Deputy Magnuson made in the line of duty while serving and protecting our community."

Roseau Mayor Dan Fabian, a former Minnesota State Representative, opened his comments by thanking the Magnuson family and then crediting former Border Patrolman Bob Tuttle for getting the ball rolling for memorializing Highways 310 and 11 in honor of Deputy Magnuson and Patrol Officer Lobdell.

"For that to happen, legislative action is required," he said, explaining that he and State Senator Mark Johnson had bills drafted as required by statute.

Mayor Fabian, who served five terms in the state legislature, noted that Rep. John Burkel continued the process with Sen. Johnson, and the bills were signed into law in 2021.

He then extended his thanks to all the law enforcement personnel and veterans in attendance.

"We really appreciate and support you, not just during National Police Officer Week but every day. Thank you so very much for being on the front lines and helping to keep us safe."

He concluded by thanking the Roseau County Commissioners for their financial support and also the Minnesota Department of Transportation for installing the Memorial Highway signs.

Mayor Fabian then read off the comments from State Rep. John Burkel, who was down at the state capital.

"Since Minnesota became a state, we have lost 298 officers in the line of duty. We honor their sacrifices, and today I appreciate the opportunity to send my best wishes for this long overdue ceremony dedicating portions of Highway 310 and Highway 11 to Deputy Richard Magnuson and Patrol Inspector Robert Lobdell.

In Rep. Burkel's final comments, he mentioned that true love is about sacrifice, virtue, and service.

"For fallen officers everywhere, and especially today for Deputy Magnuson and Patrol Officer Robert Lobdell, we thank them for their selfless example of courage and valor. May God bless the families and friends of these fallen officers."

Jack Swanson introduced Roger Magnuson, the younger brother of the late Richard Magnuson, by mentioning that a recent Roseau Times Region article had reported that he had said that Norwegians aren't fond of public speaking.

Roger smiled and began by thanking everyone for being present.

"This means so much to our family, and we only wish our parents were here for this occasion," he said, relating that his parents were so proud of Rick and had missed him deeply.

"There isn't a day in the 44 years that he's been gone that I haven't thought about Rick, whether it's a favorite memory or hearing a favorite song like American Pie."

They were very close, being the two youngest of five brothers.

"He was a loyal brother who told our parents that he fell on a rock in the pasture, and that's why he needed stitches when it was really due to the rock fight we had on our way home from the bus."

He concluded by extending his thanks on behalf of his family for making the day possible.

Not all Norwegians get tongue-tied speaking in public.

Cousin Alan Magnuson regaled the audience with a lengthy recollection of Richard's 1962 Plymouth Belvedere and all the parts - bumpers included - and how often he was overdrawn at the bank in International Falls.

Mr. Alan Magnuson recalled the morning he heard about Rick being killed in action and how sad it was.

"It would have been fun to see how Rick turned out. We never got the chance. He was taken from us and I miss him. Here's to his memory."

Cousin John Wickstrom, also an International Falls native, recalled the fun times he and Rick had growing up. They were the same age and lived six miles apart.

John related that he had visited Rick in Thief River Falls while home on leave from the Navy in 1978.

Rick had just gotten engaged and had reservations about pursuing a law enforcement career, particularly the risk of being killed.

"I think his thoughts about having a family had given him some doubts. He plowed on and graduated and started a job in Roseau a short time later, and we all know what happened then."

He described his cousin as handsome, friendly, a great guy and future family man.

"And then he lost his life to a devil of a man. If anything good can be said to have happened from this, the whole incident led to the capture of this man and probably saved other lives being lost to this horrible man."

"We miss you terribly, Rick."

After the laying of the wreath, a sliding door was opened to the American Legion Post #24 rifle team standing outdoors at attention.

Then came the playing of Taps by Alex Burkel and Kyle Erickson standing 20 yards apart in the frigid wind.

"May the road rise up to meet you. May the wind always be at your back. May the sun shine warm upon your face; the rains fall soft upon your fields and until we meet again, may God hold you in the palm of His hand."

Julie Sprague was Rick's sweetheart. They had big dreams.

"I now have a significant other in my life and that's just recently," she said. "The one thing I remember that Rick said was 'Never say goodbye. It's always see you later.' So, for him, it's 'I'll see you later, Rick.'"

She was a young woman then, only 21 when Rick was killed 44 years ago this coming August.

"Rick and I met in Thief River at school. I was in cosmetology and he was in law enforcement and we fell in love. I moved to Roseau ten days before he was killed. In that time, we got the church ready for our wedding, picked out rings, and had all these plans made."

Her life is more complete now that Earl is in her life.

She stood still a moment, a woman approaching 65, and remembered it all a lifetime ago.

"Rick was the love of my life, but now I have a great guy, Earl. He's with me and had his arm around me."

Then, she walked a short distance in the gusty winds to the special highway sign and laid the yellow tulips on the ground.

Rick would be proud of her.