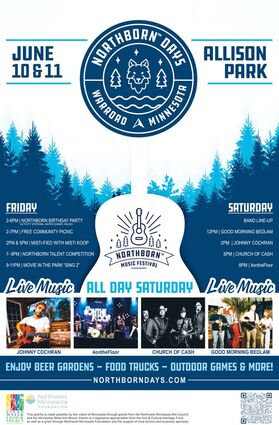 The 4ontheFloor rock band from Minneapolis will perform at the 2nd Annual Northborn Music Festival on Saturday, June 11 at 8 p.m. in Allison Park in Warroad. The group is known for each member playing a bass drum, and for writing all their songs in 4/4 time.

Gabriel Douglas met guitarist James Gould in Duluth and they bonded over Led Zeppelin. Gabriel worked as a booker of UMD events that led him to work at Varsity Theater in Minneapolis. One night Gabriel discovered a bass drum left behind after a show and the idea for the band was formed. Soon after bassist Chris Holm and drummer Mark Larson were brought on board and the four of them formed 4onthe Floor. Their band has been described as playing meat and potatoes rock.

"Meat and potatoes rock is simple cooking with quality instruments," explained Gabriel Douglas. "We aren't looking to play 14,420 scales during a set, we aren't going to have a syncopated triplet at six minutes and nine seconds into a song that is rehearsed 911 times. We've got the cowboy chords and the hummable riffs of the music we adore and attempt to put our own spin on it. We aren't reinventing the wheel. Rock'n' roll has been rolling across the countryside for generations now. Yet we are here to embrace all we've heard and where we want to go. We've got fundamentals in early blues, early country and western and early rock'n'roll. It's not lost on us, the beauty of a six-stringed instrument being amplified. We play fun, energetic high-octane music."

"My pa spun a lot of the Guess Who and their contemporaries around the house when I was growing up, so that's been a staple of my listening diet ever since," reports Gabriel. "That sort of seeps into my songwriting, giving it a noticeable worn feeling compared to a lot of the cookie cutter mainstream rock that people associate with the 21st century rock'n'roll.

I got my own iterations of that sentiment through Canadian radio of the 1990's. We could grab CITI 92.1 on the right nights from Stephen. They introduced me to the Tragically Hip, Sam Roberts, Big Wreck and countless others."

It won't be Gabriel's first time in Warroad.

"I've been to Warroad a handful of times," said Gabriel. "I'm from Stephen, so I remember running track in Warroad. I've also spent some time there on some Lake of the Woods excursions! We are ready to bring our energetic rock'n'roll to Warroad!"

The 4ontheFloor have shared the stage with ZZ Top, Zac Brown, American Aquarium, Lucero, Charlie Parr, Minus the Bear, Trampled By Turtles, Willie Nelson, Nathaniel Rateliff and many others.

Saturday's Northborn Music Festival will begin at noon in Allison Park when Good Morning Bedlam takes the stage. This award-winning folksy bluegrass band from Minneapolis performed at last year's festival and is back by popular demand. Good Morning Bedlam is known for their contagious energy, dancing around the stage with playful wildness, as well as their tight soaring three-part harmonies, and thumping kick drum.

At 2 p.m. Johnny Cochran, a country pop artist based in Nashville, will take the stage. Johnny Cochran: The Ragin' Cajun, from South Louisiana, performs an especially catchy original song "Kiss Too Good" from his album BAW released in 2021. Other songs on the album include Cuttin' Up, Summer's Coming, Dear Love and Like Sugar Cane. The band will judge the Northborn Talent Competition Friday evening.

At 5 p.m. Church of Cash will bring the genre-spanning music of Johnny Cash to life. Jay Ernest formed Church of Cash in sunny Honolulu in 2010, and now after touring throughout the U.S., Europe and Asia, Jay has returned to his home in Minnesota to spread the gospel of one of the world's most important and enduring songwriters. The Church of Cash is not a country band, but a tribute band true to the music of Johnny Cash. Jay Ernest's deep baritone is especially rich in the band's performance of "Walk The Line".

The four bands performing from noon to 10 p.m. are artists who intentionally represent a variety of musical styles in hopes that all who attend can enjoy and appreciate their talent. In addition to music, food trucks and beer gardens will be on site as well as yard games.

Allison Park, created in memory of Allison Marvin, and Northborn days, represents all of us who are "north" born. Northborn is a way of life for those of us born and raised in northern Minnesota. What does northborn mean to you?

"Being Northborn to me means family! We look out for each other and take care of each other. When people in the Warroad area are in great need or have suffered a great loss, we all show up and rally together and take care of each other. I love seeing the growth of our community and the hope and excitement it brings. Being Northborn, we truly do cheer each other on and want achievements and success for all!" --Michelle Johnston

"Northborn means not having to worry your parents when you were playing with kids in the neighborhood and really the whole town. Northborn means swimming, fishing, playing ball, and hunting, as well as having a good work ethic." --Mike Palmquist

"Being Northborn means pride and joy in our community. Being born where Allison Park is now makes it all the sweeter to be northborn!" --Karen Dethmers

"Being Northborn to me means being part of the last small town generation. Living in a place where the violence of the world hasn't yet touched. Growing up in the north meant learning how to live off the land, hunting, fishing, and gardening. It meant you knew your neighbors and your children were safe." --Laura Dvergsten

"Northborn=neighbors stopping by your house for coffee in the AM, adult beverages in the PM. It's the Tagnes and the Bednar, the Swift Ditch and Blueberry Hill. Northborn is people waving when you meet them on the highway." --Justin Storey

"Northborn means living a slower paced life, hearing birds in the morning and seeing stars at night. It means campfires, playing cards on Saturday night, coffee klatches and quilting clubs. It's lefse and lutefisk. It's when the store clerk says "have a good day'. George Strait's song "Heartland" hits the nail on the head when it comes to northborn." --Pamela Fish Cole

"Being from Warroad gives you certain bragging rights; the hardiness from winter, hockey is well-known, the way we are proud of our Native American family, it's living on the shores of Lake of the Woods and only six miles from Canada. Even if you are no longer living in Warroad, you still brag about it!" --Pennie Newgard

"Living in God's Country, we have the jealousy of many southern born. It meant being tougher than normal to get through the cold winters." --Lynn Sandy-Braegelmann

"Being Northborn to me means growing up with family and friends who shape your whole life! The community you are a part of is essential to who you are! We come together when needed and support each other! To me we live in an area that is pure and simple and not too populated, just the right amount to enjoy all that northern Minnesota has to offer! --Cristal Cole

"Best part of being Northborn is camping, fishing and hiking, and that's just Tuesday! --Leslie Nicholson

"Uff da. This is a complex one to answer. To me the term sounds so fierce, it calls out to both our Viking ancestral bloodline along with a reflection to the proud Native American spirit that can still be felt throughout our land and water. Being northborn means a deep genetic need to be a pioneer, to be first at anything, to take risks. Being northborn means you will know classmates' birthdays and middle names and as an adult describe someone by going through their family tree to connect how you are connected just like your Scandinavian grandparents did. Northborn means a deep connection with your community and culture."