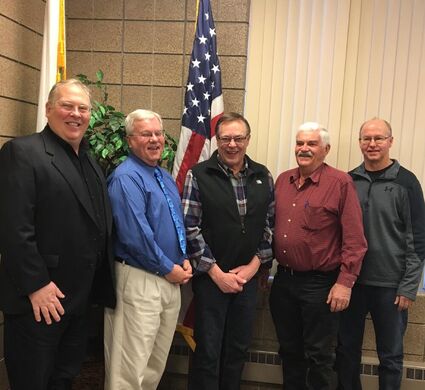 Commissioners Horner, Swanson, Falk, Walker, and Wicklund in the boardroom several years ago

Last Saturday afternoon, the news spread quickly that District 1 Roseau County Commissioner and Board Chair John Horner, 62, had passed away.

Mr. Horner, a first-term incumbent, represented the Warroad area and had recently filed for reelection.

On his first day on the Roseau County Board after being sworn in as a commissioner in January 2019, he was never destined to be a wallflower or a nonentity.

He stood out and he was captivating. There were high expectations that he would be a fixture on the board for many years to come.

"I am shocked to hear of John's passing. He was genuinely a great guy. He will be missed but not forgotten."

Commissioner Jack Swanson was reached by cellphone north of the Twin Cities.

"I didn't expect this," he said, adding that it is so hard to understand.

"I believe he had some procedure done and I know he was in severe pain. But I don't think anybody, including John, knew that this was potentially life-threatening. He had been in extreme pain at least for the last couple of months."

Mr. Swanson was asked what he enjoyed about his fellow commissioner.

"I liked everything about John. He was smart and funny. He was very well-read and had strong opinions that he was absolutely willing to stand behind."

"That's the best way to describe him. He was just an absolute leader."

He noted that Commissioner Horner was running unopposed in the November election.

"He had no opposition. I think that's a reflection of what a good job he did in his first term."

John had impressed Swanson from the very first day as a commissioner.

"I liked John very much," he said, adding that Mr. Horner had a great persona.

"I'll say this about John and I'm not belittling any other commissioners, but I enjoyed working with him probably more than anybody," he said, adding that he was a really sharp guy.

"Nobody on the county board I worked with could put humor across the way John could and work it into what you were talking about."

Walker recalled that he knew John before he got on the county board, but not really well.

"And once I started working with him, he was so much fun. He had a great sense of humor. I was never around anybody with quite that good a humor," he said, mentioning that John also had a serious side.

Walker mentioned that he had a hard time emotionally when he heard of John's death.

"There was only one John Horner, and he really hit my soft spot. At the last county board meeting John was at, he looked across at me and there was something he didn't know," said Walker, noting that it concerned an issue John didn't understand.

"He said, 'I know you've been here the longest and I want to hear your opinion.' That's the kind of guy he was. He was really smart, but he knew that there were experiences he hadn't had yet. He worked really good with people who had more experience."

Mr. Walker paused before summing up his feelings.

"John was the kind of guy you loved to have around. He was so good to work with."

During supper on Saturday, Commissioner Daryl Wicklund voiced his appreciation and respect for his late colleague.

"John had a lot of compassion for what he was doing, whether it was his work at Marvins or things with the county. When he believed in something, he went with it," he said, impressed that there had been no fence straddling.

"One thing that really struck me about John is he was really articulate and used a lot of big words. The man read book after book and was very smart."

He added that John had been pretty reserved about his health troubles.

"Both he and I were up for reelection. He was expecting to have surgery this coming week, I think. Whatever happened was unexpected."

Possibly, John had a premonition.

"He had told me that when he left this earth, he wanted to leave things better than they had been," Daryl said, recalling that included the new Roseau County Highway Department facility that some were opposed to.

"John believed in it, and he didn't waiver from it, and I respect him for that. We didn't always see eye-to-eye. That's for sure!"

Daryl saw another part of the man that was impressive.

"He had some health issues, but he never elaborated exactly what it was. I know he was doing a lot of doctoring and was in a lot of pain the last month or so," he said, noting that it was a lot more serious than he assumed.

"I didn't know John very well before he became a commissioner, but one thing about him is he was very intelligent and had a lot of good common sense."

There was a pause.

"Usually, the two don't go together very well. People who are very intelligent don't have much common sense," he said and laughed.

"In the meetings, he was very entertaining and had an excellent sense of humor," he said, adding that John was a special individual.

"I really enjoyed him. He was just fun to have on the board. He was excellent," he said, underscoring that there was another special trait about the man.

"He always talked very highly of his wife and his children. He was just a great family man and a good guy."

County Commissioner John Horner, a dedicated public servant who was elected in 2018, made a huge contribution during his tenure, according to his colleagues, who mourn his passing.