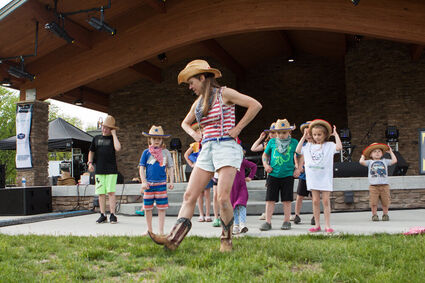 This past weekend the sun shone brightly for Northborn Days! This two-day community event began on Friday with a community picnic served with all the fixings, and dessert was available with a quick stop at the cotton candy or ice cream stations! The Northborn Birthday Party ran alongside the picnic and commemorated the 3rd Anniversary of Allison Park and the actual birthday of its namesake in a cowboy theme. Various stations were set up across the park including PonyCycle rides, face painting, a shooting gallery, tattoo parlor, and many more.

At 3 p.m., children participated in water games that ended in a Typhoon Tug of War and all-out water gun fight! Then the competition continued at 4 p.m. with individual and partner races including crawling, crab-walking, gunny sack hopping, wheelbarrow, piggyback, and three-legged races. The top three finishers in each race took to the podium to accept their medal - a wooden medallion with the Northborn wolf logo engraved by Lake of the Woods Coffee Company. To end the birthday party, Misti Koop, who has entertained audiences at Medora, engaged younger audience members with music, puppets, and dancing.

Then the night shifted to feature the talent of northwest MN. First up were 6 acts in Division I (ages 13-20). Four solo acts and two duos took to the stage and sang their hearts out. After a short intermission, it was time for Division II (ages 21+). Seven solo acts competed with talent from Roseau, Warroad, and Baudette represented on the stage. Loralee Marvin emceed the program and the members of Nashville band, Johnny Cochran, served as celebrity guest judges. In the end three winners in each division were awarded cash prizes. Division I winners were: First Place – Malachi Lilly and Victoria Berry ($450), Second Place – Natalie Homme ($300), and Third Place – Nissa Nestegard ($150), all of Warroad. Division II winners were: First Place – Samantha Tangen of Roseau ($450), Second Place – Mir Albin of Roseau ($300), and Christy Olafson of Warroad ($150). The evening ended with an outdoor movie showing under the stars.

On Saturday, with food trucks lining the streets, cornhole boards set out, and interactive inflatables blown up, Allison Park looked ready for action! The first band to take the stage was a returning band from the inaugural event, Good Morning Bedlam. Their perfectly blended harmonies and lively melodies were a great way to kick off the event. Next up was Johnny Cochran who played a mix of original songs and well-known country hits.

Throughout the day, there were various activity offerings. Christina Petersen from Warroad Body and Balance offered two sessions of yoga, and Folk School Warroad offered two Japanese braiding opportunities. A teen Cornhole tournament was held with cousins Max Strand of Roseau and Leif Olafson of Warroad claiming first place. The adult cornhole tournament began at 3 p.m. and carried on into the evening with the team "Psychos" taking first place. In addition to the inflatables, a fair-style ride called a Gyroscope and Mechanical Bull were huge hits! The caricaturist's booth was busy all afternoon, mini golf was set out, and Roseau County Team Epic was on site offering kids activities and games.

At 5 p.m., Church of Cash, an award-winning Johnny Cash tribute band, performed. Lead singer, Jay Kalk, absolutely nailed the Man in Black's voice and mannerisms singing tunes like Ring of Fire, One Piece at a Time, Folsom Prison Blues, and other fan favorites. The Jensen Sisters of Goodridge made a surprise appearance, debuting one of their new songs and sharing the role of June Carter Cash in a rendition of Jackson. The final band of the night was The 4ontheFloor who brought their stompin' blues and rock 'n' roll and closed out the night with a bang!

After many, many months of planning, it is hard to believe that the event has already come and gone. We could not have done it without the amazing support of our grants, donors, sponsors, volunteers, and most importantly, all of you who attended! We will be sharing event photos and highlights on our social media (@northborndays on Facebook and Instagram) and are already thinking forward to next year's event, so make sure you mark June 9-10, 2023 on your calendar!!

Next up on the event calendar for Warroad Community Partners is the Patriotic Variety Show and Movie in the Park at Allison Park on Friday, July 1st beginning at 7 p.m.! If you have a talent with a patriotic twist that you would like to share on the big stage, click on Patriotic Variety Show under the Events tab at warroadcommunitypartners.org to sign up! More information on this event to come in next week's article