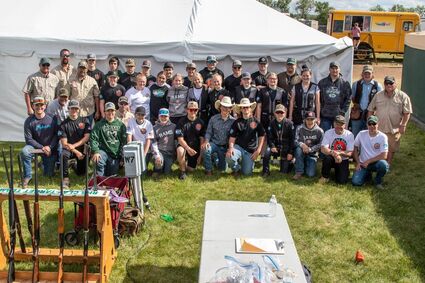 We won the day! That was head coach Troy Weiland's message after the Roseau Clay target team battled brutal winds to win the conference 4A Championship at the Minnesota trap shooting Championship in Alexandria. Wind gusts exceeded 40 mph, some of the worst winds ever seen in the history of the Alexandria tournament. Conditions kept scores down, so the team fell just short of qualifying for the State tournament. In a bitter sweet victory, the team captured both the Varsity and Junior Varsity Conference championships. Beau Keagle, Henry Finney, Jazmine Dirks, Sam Gross, Olivia Saage and Faith Lyberg received high gun awards, with Beau and Jazmine being overall top guns for the Conference.

The Alexandria tournament wraps up the trap shooting season for most of the RHS Clay Target team. Beau Keagle will be competing in the MSHSL State Championship June 25th in the individual class and Beau, Henry and Gilford Finney, Adam Weiland and Tate Dale will travel to Michigan in July for the National Championship. Best wishes for success for these 5 athletes and congratulations to the team and coaches for another great spring season! A huge thank you also goes out to the 7 team seniors for their huge contributions to the team's success.