Beau Keagle Can Shoot With the Nation's Best 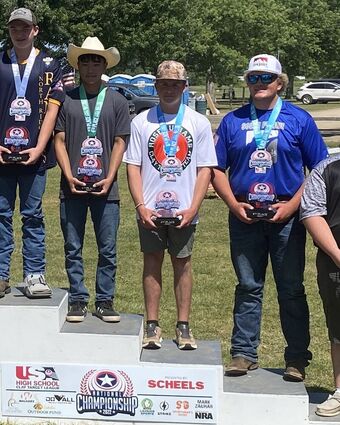 In what has been a very successful stretch, the Roseau High School Clay Target Team - national champs in 2019 and third in the nation in 2021 - recently had their highest individual placewinner.

"Beau shot a 198 out 200 over two days in the individual competition," said head coach Troy Weiland.

Beau shot a 98 his first day and then he finished off his high school career with his first ever 100 score in competition.

"There was kind of a monkey on his back trying to get that 100 in competition. It was right down to his last 100 rounds of his high school career," said Weiland.

And Beau aced it!

He became the highest individual placewinner ever for Roseau.

"In 2019, our team won the national tournament. There was no tournament in 2020 because of Covid. Last year, we took third nationally as a team."

"We have a young team," he said, explaining that Friday was the team qualifier.

There were 230 teams that shot, and only 80 advanced to the team championship on Sunday.

Roseau was one of them.

Saturday was the qualifier for Sunday's individual championship.

"Overall, Beau was sixth out of more than 1,800 in the individual competition," said Troy, adding that Beau received a trophy and a medal.

"He's a good shot and he's dedicated. Without a doubt, he shoots more rounds than anyone else every season."

"It's hard to explain, but it felt pretty good," he said last week.

Hitting the perfect 100 for the first time ever in competition is now a lasting memory.

"If the confidence isn't there, the nerves can really get to you. You have to be confident if you're going to be among the top shooters."

He had no complaints about the weather, which he described as good all three days.

"The thing that affected me the most was my focus."

"Next year, I will be shooting with the Amateur Trapshooting Association. It's like the high school thing, but everybody can shoot in it."

His plans are to attend Hibbing Community College to study electrical maintenance.

He enjoys the level of competitiveness in clay target shooting and what it takes to be on top.

Then, he mentioned his special clay target .12 gauge Zoli shotgun.

What did it cost?

"I think they're about ten grand. I've had this one for two years," he said, explaining that his stepdad, Darren Hedlund, got a good deal on it.

"Everything lined up. I'll have it for the rest of my life."

The Italian shotgun could be considered the Ferrari of shotguns.

"I'm a lefty. I started off shooting right-handed and then my eye dominance changed, and they switched me to left-handed in seventh grade."

"It depends on the shot."

He was asked how often he cleans his Zoli shotgun.

"After every competition," he said, and laughed when it was suggested not to let it lie around unattended.

Tip of the Hat