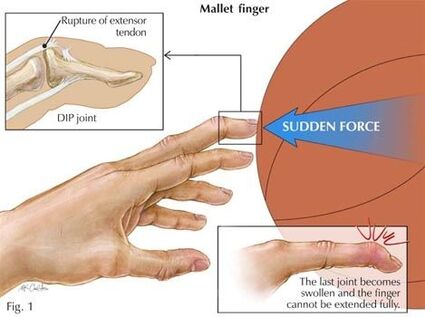 We were playing Warren in a JV basketball game at home. I don't remember how many points I scored, or even if we won or lost the game. The only reason that this game is memorable to me is because it cost me the rest of my Sophomore basketball season.

We were on defense, and the other team's player was driving the lane. I went for the ball, but missed and jammed my finger into his thigh. I had done the same move a hundred times that basketball season, but this one time it cost me. All I felt was pain in my right index finger. I thought it was only a badly jammed finger, so I shook it off a little bit. I looked down and saw that the bones were not where they should have been, so I instantly knew I broke or dislocated it. I sprinted off of the court and yelled, "I broke my finger!" at the bench before I left. Suddenly my finger started to bleed, which normally doesn't happen when a finger gets dislocated, that normally only happens when it fractures and breaks the skin. This type of fracture is called an open fracture.

My parents rushed me to the emergency room, and I was still in my basketball jersey and basketball shoes. The nurse cleaned up the blood in one room and then they took me to the x-ray room to get an x-ray done on it. After the x-ray we went back to the room we started in. After a while, the doctor came in and looked at my finger. The doctor determined from the x-ray that it somehow wasn't broken, so they got ready to pop it back into place. Instead of breaking my finger, I dislocated two of the three joints in my right index finger. They got a pan of water and some numbing agent, then they numbed my finger up. The doctor yanked on my finger really hard and I couldn't have imagined how much that would have hurt without the numbing stuff, because it hurt extremely bad even though I was numbed up. After he yanked it into place, blood came gushing out into the pan of water. I had to sit there and let it bleed for five minutes until the bleeding subsided a little bit. After all this happened he still had to stitch up my finger again, but the numbing stuff had worn off by now. The stitches didn't feel good at all, but my finger finally looked like a finger again. They took more x-rays to make sure everything looked normal again. They gave me a splint and antibiotics and told me what to do with them, and then I went home. They told me to keep the cut covered, and to change the wrap every day. They also gave me pain medication, but it came with this warning: "CAUTION: OPIOID - RISK OF OVERDOSE & ADDICTION." I decided not to take the opioids after I saw that because the pain wasn't that bad, and I ended up taking Tylenol instead. After a couple of weeks I was able to start rehabilitation exercises in order to help me move my finger again. It took a long time to be able to move my finger almost normally again, and moving my fingers was something that I took for granted before this happened.

I ended up not being able to play basketball for six weeks, and the doctors cleared me to come back for the last game of the season. We were playing Warroad and I felt totally uncomfortable. I felt like I was going to reinjure myself that whole game. One freak accident ended up costing me my entire basketball season. It still hurt to shoot a long range shot in the November following the accident. I still can not bend my finger all the way down, and I doubt that I ever will be able to. I never realized how much we use our fingers until I had a splint on one of mine and it hurt whenever I bumped it into something. I am very thankful that I write left-handed, because writing would have hurt a lot and I would have been much slower at it.