On the Road again with Buzzy and his bride 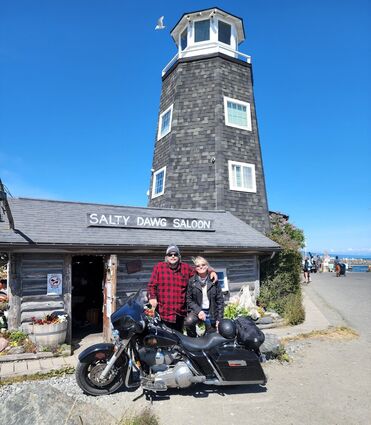 The easy riders on a visit to the finest stop at Homer Spit, Alaska

Scott Johnson and the former Linnae Knochenmus, 1981 and 1989 Roseau High School graduates respectively, hail these days from Soldotna, Alaska, on the Kenai Peninsula.

They're as likely to be encountering grizzly bears as they are to be cruising on motorcycles hell-bent for another adventure.

In 2005, Scott survived a possibly fatal plane crash while more than a decade ago, Linnae was going toe-to-toe with cancer.

So, who's going to sit around and waste a perfectly good day, rain or shine?

Not this couple, whose nicknames are Buzzy and Nae-Nae.