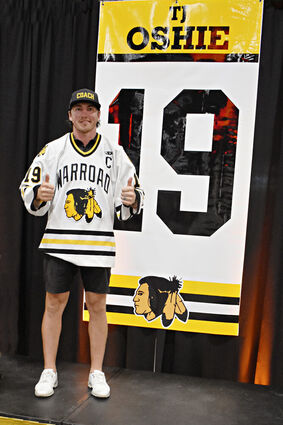 On Saturday, July 30th, there was blue skies and sunshine in Warroad, aka Hockeytown USA, and the sun just kept shining down all day. Just before this year's Annual Celebrity Golf Tournament began at 11 a.m., the Minnesota Wild, along with Bally Sports North, and Minnesota Hockey announced that Warroad will host Hockey Day Minnesota in 2024.

"We are thrilled for Warroad to host Hockey Day Minnesota 2024," said Matt Majka, Minnesota Wild President. "Warroad is deeply embedded in Minnesota Hockey history and we can't wait to celebrate and showcase their hockey community in 2024."

Warroad's festivities will be part of a day-long event broadcast on Bally Sports North, designed as a celebration of the game from peewee to pro. Proceeds of the event will benefit Warroad's Area Hockey Association in an effort to grow the game through youth hockey.

"Ravndalen Farms was the winner of this year's Celebrity Golf gold jackets with a score of 17 under," reports Nick Marvin.

"T.J. was such a trooper during the golf tournament," said Nick Marvin. "His many fans were on hand to get his autograph and he was so patient, signing for everyone who asked. Sometimes it took 45 minutes to get from one hole to the next."

"It was a great time as always," reports Alan Hangsleben. "The course was in great shape considering the high water levels. The Celebrity Golf Tournament is a great way to give back to youth hockey in Warroad."

The Celebrity Golf Tournament weekend got off to a great start early Friday morning.

"As soon as the celebrity golfers arrived at the airport, local hockey dads were on hand to take them fishing on Lake of the Woods," said Nick Marvin. "Many went right from the plane to the boat. There were ten boats that took forty guys out fishing for the day."

Mayor Bob Marvin once again hosted a fish fry Friday night at The Shed, with forty pounds of freshly caught walleye, battered and fried, served with American fries and pork and beans. Hockey legends Tom Chorske, Paul Marvin, Alan Hangsleben, T.J. Oshie, and many others were on hand to enjoy the feast as well as check out over 100 rare and limited edition antique muscle cars and hockey memorabilia and jerseys signed by Gretzky, Howe, Marvin, and Oshie.

"City of Warroad, this is the most special place for any kid to grow up," said T.J. Oshie. "My only regret was that I didn't come here until I was fifteen."

In a Rink Live interview with Jess Meyers and Mick Hatten, T.J. discussed his move to Warroad before his sophomore year.

"Moving to Warroad, my dream was to fit in with the varsity players," said T.J. from the Gardens Arena. "It was the coolest thing to come from a large town where hockey is the last thing on everyone's mind, to come to Warroad where hockey is just a way of life. Two of those yellow banners, the state title ones, those are the banners that are a little more important to me, because obviously, it was winning the state championship with my boys, my buddies. Having #19 up there will be pretty special."

Jess Meyers, a proud Warroad Warrior graduate, was the MC of T.J.'s jersey retirement presentation, where the Warroad Warrior 2022 State Championship girl's hockey team were also honored and had a team photo taken with T.J. Oshie and Gigi Marvin.

"T.J. was presented a Warroad Warrior custom golf bag and a canvas wall hanging of him and his dad," said Nick Marvin. "I could tell he was very emotional. T.J. wore his dad's Coach hat during the jersey retirement in memory of his dad. After the banquet and program were over, T.J. stuck around the arena until 1 a.m. talking with everyone and I could visibly see him relax. The Gardens Arena is a place where T.J. can relax around other hockey players and enjoy himself."

To watch the complete Rink Live interview with T.J. Oshie log-on to The Rink Live Podcast on Facebook. T.J. discusses his move from Seattle, to play with the Warroad Warriors, his time playing for UND, the St. Louis Blues, in the 2014 Winter Olympics, and Washington Capitals game with the Seattle Kraken. And how in Stanwood, Washington, before his move to Warroad, T.J. was told by a coach to choose between hockey and basketball. For T.J. Oshie, there was only one credible choice; choosing to achieve his hockey dreams!